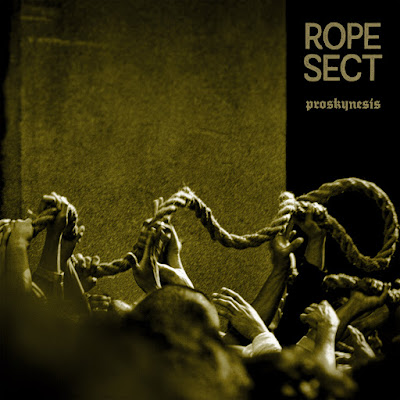 The German lords of gloom are back. This time we only get 6 songs, but I will take whatever I can get from these guys.  I have been a fan since their inception and this album finds them going down the dark road . Less aggressive than their previous offering in terms of the guitar attack, the mull on the melodies more and give the vocals room to breathe. This album is odd as the first three songs are three parts of the title track. I am reviewing them as 3 separate songs since that is how they track out. The first one has some rock drive in the guitars as the vocal lay back in a mellow croon. The vocals sit back against the guitar. The second part I had to listen to a few times to fully absorb, it starts off more doomy, though kicks into a more death rocky riff that has punk drive to it without forsaking the room for melody as they slow down to allow the vocals to emote. They are more melodic thought starkly plaintive, though this guys has improved as a singer over the years. There is a lingering metal feel that bridges some sections of the song.

While of the 3 parts it all works the 3rd part is just the hookiest and stands on it's own the best. It also serves as a suited bridge to the other three songs. "Handsome Youth" has a less organic feel when it comes to the drums, but as a song , composition wise is it really strong. The melodies are all very gray which I can appreciate. Lyrically it is nice too. Images of empty souls and such.  The contrast between the bass and the guitar on "Lava" is really great. Lyrically I am not sure what it has to do with the title but oh well. I know these guys are from Germany but there is something Irish feeling to the mood.

The first song that stands apart as a newer sound for these guys while being true to what they do is the last one. The vocals are slightly softer , though the Irish thing can be felt here as well, despite them being German, not sure why this gets stuck in my head but it does. Despite this fact I would not say it grips you like the other songs, in fact the more sedate vibe , makes it less catchy than the more driving songs where the melody counterbalances things.  Moodier as a whole for sure. These guys have really come into their own since the last album and I am glad to hear them continue the path here.  I will give this album a 9.5 as I allow it to grow on me, and look forward to hearing more from them in the future.