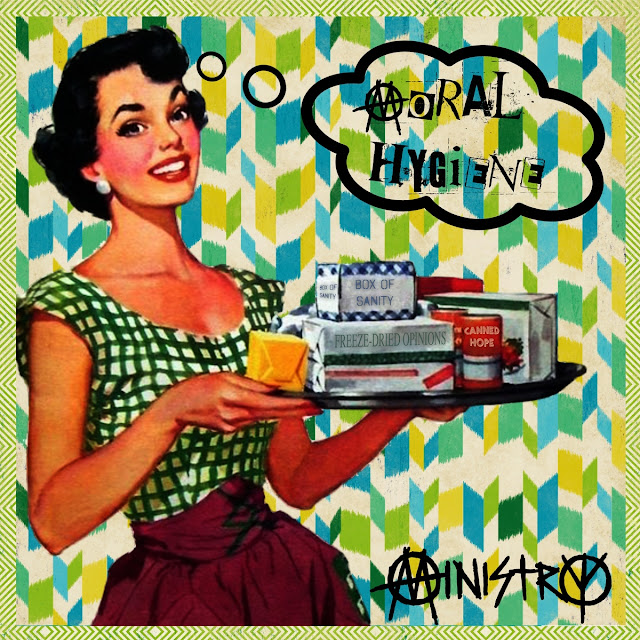 This is the dystopian future Ministry's music always promised. Now will Uncle Al deliver ? Clan of Xymox got very dystopian , so Al can not let a dark wave band show him up in that regard. He brings Jello Biafra on board to recreate Lard vibes with " Sabotage is Sex". The song seems more about cops, which Jello is very consistent, with what he does. There are some pretty cool guitar riffs on this one. The first. Not the first time Al has brought other singers onto a Ministry album, Gibby from the Butthole Surfers being one of the more noted. So far it is what you would expect from a Ministry album, not too metal or punk, just enough electronic elements like samples coloring the corners to remind you this is a industrial band,  It is interesting when Jello says fight the powers that be , is he talking about both sides of the fence. He is smart enough I would think he would have to mean that,.
"Disinformation" is much more militant in it's industrial attack which works for me. The cover of the Stooges "Search & Destroy" feels like it should be on a Revolting Cocks album, but it they do a good job of capturing the feel while adding more of a jammy rock groove to it, rather than going into the heavier direction you might expect.  "Believe Me" is a darker turn, and more melodic as well. one of the better written tunes on the album.  The darker mood continues on " Broken System' which is like something from "Dark Side of the Spoon" but with sitar instead of banjo. When the song kicks in there is more of a rock n roll feel things. "We Shall Resist " is more of an atmospheric piece as it feels more like an interlude than an actual song. The same thing can be said for "Death Toll" where preachers praying away COVID- are sampled. Then a remix of "Tv Song" goes down. It is a 2021 version where more current battle lines are drawn.
So the album starts strong and then goes into more experimental things that are less about songs and more about sounds. Not the first time Minstry has done this on "Psalm 69" it worked really well , so I will split the difference as I think as a whole album this is balanced out by the fact that when they are writing actual songs they are really ripping and true to who they are so I will give this album a 9.5.
Posted by Wilcifer at 8:55 PM