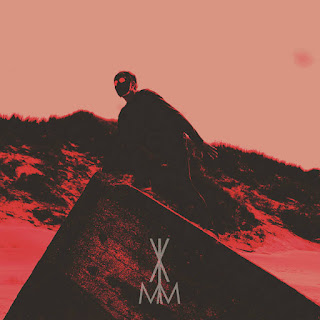 At first your ears might be leading you to believe these guys are  Germany's answer to HEALTH. In almost seems like this fact is being made this clear by the second song. I would have been fine  with this if it had been the case since the last thing I want is another band trying to be Sisters of Mercy, we have a hundred already thanks. They veer around as things progress and get into traditional goth more than HEALTH, because well they are German how can this resist. The first song is more progressive than I expected in terms of arrangements and vocals going in every direction.  The drums on the third song could come up in the mix. The guitars and synths almost drown them out. The vocals sit back into the track more than the other songs.  "Meter' finds the trend towards more normal dark wave continue and lends credence to the theory I once had that when singing in German it is easy to sound like you are flat.

Things return to a hazy more experimental side. While songwriting is not abandoned, by "IPA'  it feels like things are getting sloppy in the haze from which they are springing from.  Things get weird on "Ad Astra", the weirdness spirals into a more atmospheric murk on "Wangendruck" which follows this one. It feel like they started huffing ether after the acid peaked. Though I certainly want artists creating these darker sounds to convey a drugged feeling. In someway it feels like they are heading toward Throbbing Gristle or Psychic Tv's land of the bizarre. Of course I know those bands are the same thing , well almost. I always have to clear up these facts as we go as some genius in their mother's basement will be quick to try and correct me like we are on Quora.

"Kartenwarten" begins their cruise into the mellower side. It works for what it is. The vocals do sit back, at first I thought it was computer speakers and when I put headphones in it just improved how things are panned , but not where they sit in this sleepy mix. "Kron" is a noise tinged industrial pounder. It reminds me a little of Uniform.   They back off on the last song and get more into their feelings and let themselves drift in melancholy atmosphere. Which does not go any where , but works for what it is. Overall this album is very enjoyable I will give these guys a 9 as if you are into this newer mixture opf post-industrial you will dig this for sure, though I am unsure how much air time this will get on my end from here.