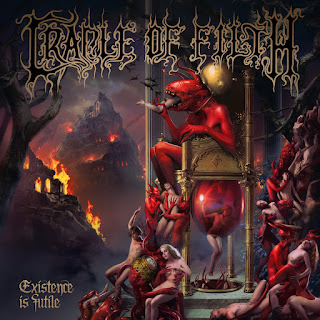 It is understandable why these guys are a metal that crossed over into a goth audience. Dani Filth\s screech has long annoyed me, but I appreciate what the band does and they have grown as songwriters as the years have gone on.  I mean they have had since 1994 to perfect it. I prefer Dimmu to these guys , but hey, I have reviewed every album they have released since this blog started so why stop now. Let's be clear this is symphonic metal and not black metal, got it? Ok preceding with the review. The opening track finds them further refining the sound, there are no surprises , you know what you are getting , it is more of a question as to how fresh they are keeping. "Necromantic Fantasies " does not feel as inspired. Lyrically there is more of a focus on  the human condition than horror framed as Satanic gibberish.  "Crawling King Chaos" is more of the same old same old from them.

The operatic soprano vocals play a larger role on "Black Smoke Curling From the Lips of War" .  They slow down and get a little more deliberate with the riffing to accommodate this .  Making this a half way decent song. Which considering how long these guys have been at it is the least we should expect from them. 'the Dying of the Embers" is the first song that catches my intention, there is a more rock n roll flavored riffs that stands out in the landscape of shifting dynamics. Dani's vocals works well with this here. The next great song is " Suffer Dominion" . The samples involved help create the mood for the narrative.

There is a better sense of songwriting on the hookier "Us, Dark , Invincible".  It goes to show heavy music can still be catchy. Granted decades for them to finely tune it past the point of battering your ear drums almost annoyingly and bookending it with spooky melodrama.  "Sisters of the Mist " proves when they lean into their more thrashy influences the results are better.  The last song kinda splits the difference on it and reminds me of what Europe might sound like if they were a black metal band. I will give this album a 7. It sounds good for what it is, but feels like they are punching a well oiled time clock than really writing songs with a passion for what they do.