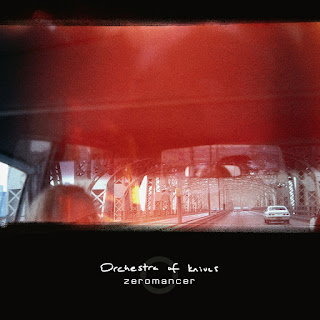 More organic than "Eurotrash" from 20 years ago which is the only other album from this Norwegian goth band  I have invested much time with. There is less of an overt industrial or dark wave feel to what they are doing now. They come across as more 90s goth alt rock, which still works pretty well for me. There is an Orgy like dance groove to the second song , which creates something a little more unique. His voice has held up well and still works in this context. There is a little more of a hushed quiver to it at the end of phrasing for making things overly emotive. I can also hear some Depeche Mode in the way this groove swings. 'Transparency" might not be as memorable as the first two songs, but it still works and might just need more time to grow on me as it is more introspective than what I am used to from these guys.

"Mourners" is a darker shade of melodic future pop. There is more tension to the brooding "Birthday". It's his party he will cry if he wants to. "Terminal Love' sounds more hopeful than terminal with it's much brighter chorus. Sure it's hooky, but it is on the happy side . The first song that really reminds me of their more industrial moments is " Worth Less Than Deutsche Marks to Me" . It has an underlying oppression to it's creeping groove, making it one of the album's strongest songs.  It is more solidly in the middle of the cyber dread industrial bed. Not saying it is more synths than machines colliding , but it works well as a song. The dynamics are dialed in nicely.

The title tracks marks somewhat of a turn for the album. It leans more in the electronic side, perhaps more cold wave , though at the same time it owes a huge debt to the electro alternative bands of the 90s which should not be surprising considering that was the scene that spawned these guys. The emotive quality of the vocals is very goth, and the most appealing element in motion.  The song after this take it in a more organic and even more goth direction with echoes of the Cure in the guitar. They take a more dynamic turn and build it up into more of an industrial anthem. The last song "San Zero" has an almost nu metal bounce to it, perhaps working off a groove with more in common with Filter. I will give this album a 9 and see how it sits on me the songs are stronger on the front in but stay pretty solid throughout.  .