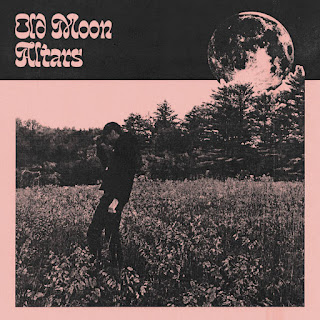 When it comes to the post-punk we accept this month it must be dark enough to cross over into the sonic realms of say the Cure or the Damned. This project does just that with a dusky shade of melancholy glazing the jangle of guitar . This is the solo endeavor of Tom Weir. He does a good job of making this feel as organic as possible. It could very well be a band knocking this out in a garage. The vocals typically sit back in the reverb thick mix. The second song his voice drops into a more despondent baritone that resonates more with me. The first song sets the stage. By the time we get to " Past Lives' we have already established the tone for the album, the jangle is more relaxed reminding me more of the Church or Echo and the Bunny Men. While the4 debt is owed to that era, this could sit along side most indie rock.

I like how the melody sits on "Anhedonia" even though there is an almost shoe gaze haze to things. Here is where the sound they created compensates for the direction of the song as they have reached enough of a balance to make it work.  The vocals take on a more sedate croon  that recalls the place where new wave a punk met going into the 80s. Even with the odd lo-fi production the song shines through. I can hear echoes of  a song like "Pretty In Pink" on "Untouched" . The vocals has a more breathy almost Throbbing Gristle era Genesis quality to them , so many influences collide from different angles to create something that is this project's own.

The album's last two songs take you into a much more downtrodden place. The sluggish guitars return to a more shoe gazing lethargy. The pace picks up for the last song with the bass driving it.  I can hear some Jesus and the Mary Chain influence within the ambiance of the brooding melodies, which once again works perfectly for me. The songs do drone, but carry enough melody to always keep you drawn in. I really enjoyed this album and want to begin searching for a copy of my own to see how it grows on me which is one of the best compliments I can give a band. I will give it a 9.5 .