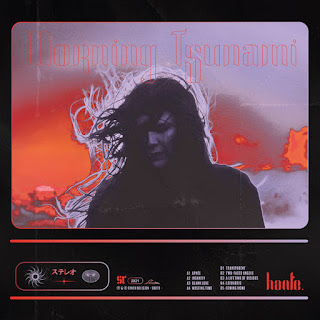 Here is another album that breezed under my radar. This one came out back in July. I have like her stuff when I have heard it , but never really sat down and fully digested entire albums. The first song is mainly instrumental any vocals sound like they are being whispered or breathed heavily against the wall of sounds. Not all beats are created equal. The second song shines a light onto this. It might be better to dance to, but overall could be put to better use as a soundtrack to a sci-fi music. While the energy and vibe of it still works , we are only two songs in. Here is the problem wit ha great deal of electronic dance music like this it is all about the sounds with very little in the way of songs to invest in. The beat is more driving to "Blank Love" but the vocal approach is more of the same.  Something needs to change by the next song in terms of dynamics and the sonic colors being used.

In terms of instrumentation this does shift on "Wasting Time " as it is not just her laying it on thick with the synths and the beat backs off some. The whispered vocals well, that is another story, until I guess where the chorus would be which is sung and thus a huge improvement over the previous song. There is more of a 90s techno lead in to "Transparent" .  Things begin to become one dimensional by the time we get to " Two Faced Angel".  It is marginally darker and vocals go from being whispered to muttered . As with most music like this layers are added rather than divert from the drum machine when it is programmed into a groove.

"A  Lifetime of Desires" circles a similar drain. This finds the album losing creative steam and becoming more one dimensional. I can appreciate the song "Catharsis' explores a darker atmosphere, but it is murkier in a more witch house manner. The vocals just serve as a layer , and this is more about the sounds than being a song as it drones . The last song is more of an outro than a fully functioning song, as it focuses on just ambiance. Overall there are plenty of pleasing dark sounds, though it is doubtful I would return to this album on a regular basis but if this is more your thing then we can give it an 8, which is more than generous.