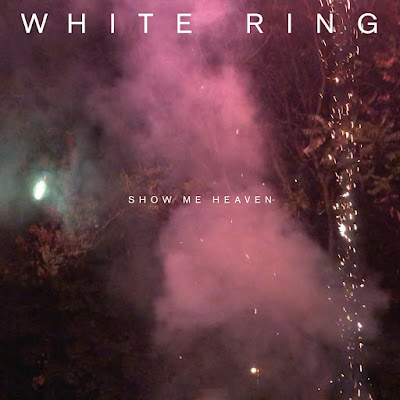 First a new Salem album , now this, one might think 'witch house" was making a comeback if it ever had anything to have come back to. The almost Tumblr reality genre, that went on to become known as vapor wave in come circles would be well defined by what goes on in the opening track of this album. Though the murky haze here is almost shoe gaze like, rather than trappy in it's darkness.  This more ethereal tone is contrasted by an industrial abrasion in the second song. The vocals are buried in this , though it works for what this is trying to do. I might not be able to handle an entire album of this , but in the context of the album as a whole it works. On "They Say Something' they split the difference and focus more on a slinky groove that finds them heading in the direction of more sound focused than song. If not trying to breathe amid all the atmosphere the beat to "Calm Down' might remind you of Nine Inch Nails.

A question to ask of this album might be can you focus on this sound and write songs as well as Salem did on their last album?  "Drop" finds this balance better though not as well as the first three songs. "Got U" you proves they needed to pick up the pace and lean more into the groove. The vocals are then allowed to fade into more of a texture and not needed to be relied on to hold the song together. There is a strum of guitar on "Fake Fuck" which feels like something Grimes might do. It should be noted Grimes pulled more than her fair share of inspiration from this genre. This does feel more song focused. "Loose" is text book witch house will male vocals drowned in effects. Speaking of drowning in effects, that is what happens to the entirety of 'Dagger III" .  "Charm" dwells in a similar dream state.

This album excels at capturing the sounds that take you to the place of narcotic sonic euphoria . You will feel like it is the summer of 2011 all over again. "Tower" is not the Zola Jesus cover you might have been hoping for. The vocals on this album never really come close to any kind of belting it out , and are content to stay obscured in the mist. If I was on drugs I am sure I would appreciate this more. They end things on a darker and denser note with a whispered vocal on the verses that reminds me of the last Hante album, but they are capable of a bigger dynamic shift on the chorus.  I will give this album a 9, as it is good at doing what it sets out to do and sounds great.