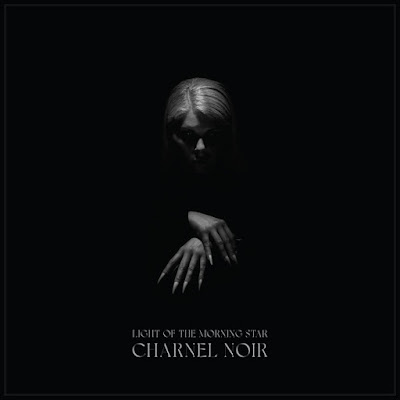 The second song is a dramatic step into restraint for the sake of an even darker melody. I might prefer the first song more as it is left to languish in the atmosphere less. Either way they are great when it comes to capturing the textures of sonic darkness in a manner than I believe and it is not all theater for the sake of fashion. Goth can sometimes mean becoming too melodramatic for your own good. They fall into this darkness on "Ghost Moon".  The melodies and the bones of the strong as not as strong as the more hooky melody that draws you in to "Hymn in Hemlock". I like this dissonant sonic wall of guitars they have when things kick in.
They go to an even more metallic place on "Lid of a Casket".  Instead of using harsh vocals they employ s whisper to create a less aggressive , but creepy static vocal over the more tense tremolo picked guitar that shows their black metal influence, though I would not say this is a black metal song.  They come back as much stronger song writers on "There are Many Shadows" that retains the darkness while adding dynamics and something more in terms of a groove to draw you in. A great deal of this rests on the drums. The drums keep things moving in a more effective direction on "the Endless Procession of the Guillotine" They keep the streak going with "Spectres"  , the guitar joining the drums to drive things while a simple keyboard melody provides just enough hook for the morose croak of the vocals to work again. Once more dissonance proves to be their friend.
The last song "Fangs in the Tree of Life" is murky than the previous song though it could use more hints of melody to break up the dense brooding. Perhaps the cavernous production that makes it echo more like a black metal album and less like the bat cave  can make this sound too dark for it's own good. Like pitch black to the point of not being able to see where they are going. Sometimes this gives more of a droning , feel. A candle of melody is often all this album needs, when that is lit to break up there murk the songs have a more tangible path. With that said the sounds are amazing to be this dark in the first place so that alone makes this album a 9.
Posted by Wilcifer at 5:35 PM

Email ThisBlogThis!Share to TwitterShare to FacebookShare to Pinterest
Labels: 9, england, goth, Light of the Morning Star