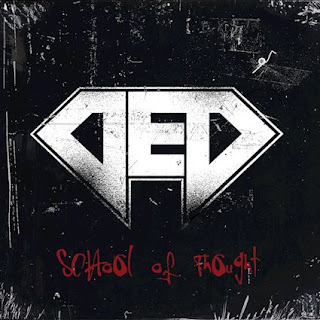 My first thought was well it's out goth month here, maybe this is one of those nu-metal bands like Coal Chamber that cross over enough to count. The photo in their press kit seemed to lend it self to this line of thinking.  The actual music while nu-metal, is bigger arena rocking in the emphasis placed on the chorus that find them begging for radio play. They are quick to jump to emo flavored introspection on the second song that is closer to the loud to soft dynamic formula that got worn out back in the days of Myspace. It is not to say they do not want to go for that after covering the Cure's "Love Song" which do we not already have enough covers of that song even if you bring along Maria Brink to help with the vocals . It is however better than having all the late 90s sounds thrown at you at once on "Eyes Sewn Shut" .

While they have the modern radio metal guitar sound dialed in it never comes across as heavy to me , just that these guys have spent too much time hanging out in LA clubs.  They want to be all the parts of Slipknot that sell albums with none of the maggots and masks when we get to "Mannequin Idol" . They keep skipping into familiar knots of tropes. The parts of their sound that remind me of Linkin Park are far more offensive since, I can not think of a prefabricated band that sucks worse than those guys. If you are offended by this because you like Linkin Park then I would urge you to follow the example of Chester set of how to deal with this. By the time we get to "Persona" which might have the album's best lyrics , all the song have begun to sound the same . I think their fans might want to heed the lyrics ' stop making stupid famous" .

"My Blood" starts off by making me think , they might be onto something , but by the dumbed chorus we are back to everything else on the radio. I think these guys have to potential to be ok, but they need to get over this trying to sound like everything else on the radio in order to be on the radio. If this is a manager or producer whispering this into their ears, then fuck them.  I am sure their fans are quick to post shit memes about Nickelback, but in truth there is little more than a shallow coat of distortion separating them.  I mean half the fault here might lie in the PR company who sent this thinking that this was the kind of music I am into. Though I might send mixed messages since I do like Issues and the new Spirit Box was pretty decent so I can take commercial music if done the right way . Not that this sucks in the manner it was crafted, from a production and performance stance everything works , the source of inspiration is the problem. Metal is like funk you can not fake it.  By the last song I no longer care what side of nu metal they are falling on and just want this to be over. I will give this album a 6, there are moments maybe two good songs, though they accomplished what they set out to do and are professional in how they do it it is just they excel at creating a dollar store Slipknot.

Email ThisBlogThis!Share to TwitterShare to FacebookShare to Pinterest
Labels: 6, Ded, in this moment, nu-metal