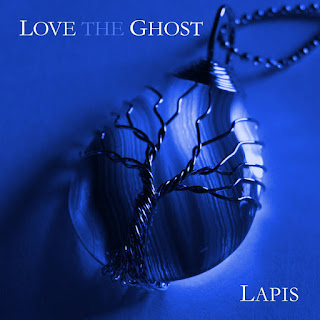 Perhaps it is the fact they are from Italy, but there is something to their sound that is too happy and reminds me of Pat Benatar. Dueling male and female vocals intertwine, against hard rock guitars. On paper I suppose this should be compared to Sisters of Mercy, but the end result is something that sounds more like it is the theme song to anime. Too much major chords , not enough minor is part of the problem. The individual parts work on their own but when put together showcase the fact when it comes to the term goth rock, the emphasis is on rock . On the second song this comes across more like a Meatloaf song. The male vocals have the dramatic quiver to them that might not be out of place in death rock, but they come across more like David Byrne or Ric Ocasek in other phrases.
"Hellfire' is a small dynamic shift they are obviously working off a very solid songwriting formula in place. "Hero" is in some ways poppier, but I like the creeping tension in the guitar on the verses before it goes total anthem on the chorus. I am not sure what the B-52s is going on with the zany " Pray For Rain" that in some ways rocks a little hard , but in others has more of a quirky bounce to. The production is really even, here I think with a better producer this could have been given a more compact and darker mix.  The choice of sounds used to color the songs is sometimes the problem as there is something that sounds like a laser hitting a spring swirling around this very confused mix.
"Justified' sounds like a collision of many things from the 80s ranging from Oingo Boingo to Billy Idol. They can not be blamed for not trying hard enough, in fact just the opposite. They might be trying to hard. " Temple" sounds like something Cher might have done during her power ballad days. It is some what steamy but for certain not moody enough. While technically a mess and perhaps misguided this album still is an easy listen if you are in the mood for something that could have been a long lost soundtrack from the 80s, so I will give it a 7.
5.1
Posted by Wilcifer at 6:51 PM