Death is June - Mortuary Spawn : " Spawned From the Mortuary" 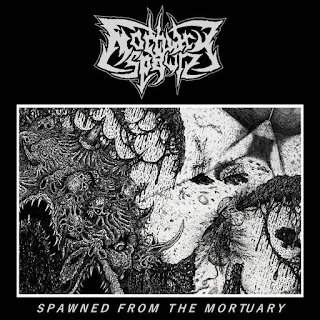 One of the challenges death metal faces perhaps more so than other genres is that if you hit the nail on the head and sound like the definition of death metal, then you have lost before you have a chance since that means you just sound like every other band. It can be a tricky balance. One that even putting extra effort into song writing might not be a cure all for. This band from Leeds, is pretty much the definition of death metal. The vocals are a low nasty guttural growl . They are dark and dense. The double bass plows over you. Aggression laces every breath they take . They are save by not sounding like any one death metal band. Along with a very raw and organic sound thanks to not being over produced.

They first song strikes me as yes this is good death metal. But as I said before when it comes to extreme metal it  the sheer heaviness itself might be so impressive that you do not stop to ask "But can they write a song , until they have blown past you with a song or two. I  had to go back and give the second song another listen to come to this conclusion. I think what this band's strength is and it might just be the fact that they are not American, but they have learned what not to do . They do not make the same mistakes that keep most death metal bands in the mire of the mundane. They never rely solely on speed. In fact more often than not they are very deliberate. They are rooted in old school death metal. So you might here things that remind you of Cannibal Corpse, Morbid Angel and  Obituary, but swirled together in such a way they are never a tribute band to any of their influences.

This is not to say they never pour on the speed on a song like "Odious.." they do plenty. They never live and breath it ,but allow it to serve them as a dynamic shift. There are something interesting twists of atmosphere in places, while they pound at you like Deicide. Another point of not is they never break the four minute. They have a great deal into their songs, and never bore you by droning on a blitz of white noise. The title track that closes the album, might not be their most inspired moment, but it is not a bad song either.  I will give this album a 9 , they excel where others fail doing the same thing.