Death is June - Hnagash : "Ritual Over the Grave" 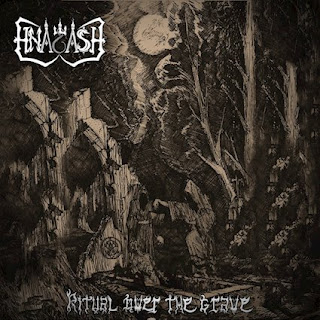 At times this band from Chile is more death doom, as others like " Black Arts" there is more of a classic metal gallop to the riff. They are rooted in dirty dark death metal. The first had me impressed because the over all mood and heaviness. This is a problem often faced by very heavy bands in that the first song crushes your head with the weight of what they are doing it is not until mid way into the second song that you think to ask, can these guys actually write a song ? This is the second time I have listened to this album and I am still no sure it. I am not getting Chilean vibes from their sound, though they sound more American than European. I know in 2021 it is not politically correct to say not all places in this world are conducive to making metal. You do not have to be a student of the occult to understand the concept that every where has a different energy .  That energy influences creative energy. It extends it's energy back generations and that too bears weight.

There are still some effective elements in place. The bass tone being one of them which plays into a denser sound. The sound is something they have going for them, but it brings into light the sound vs song struggle. There are creepy riffs? Yes, but they can not keep things from feeling somewhat dynamically flat at times. There is an honest anguish in their sound, but something is off. See the previous paragraph on energy to get this. The guitar players might be the most skilled musical element as the heavy hand drummer just beat the drums into submission and takes little risks.  I suppose they are trying to dig into more of a doom thing but on "Eternal Wandering " it sounds like they are becoming bored with their own riff. This song has the most obnoxious guitar solo I have heard in some time.  Lots goes wrong on this one. I  could not make it all the way through when I made my second pass through  this album.

The last song is an ambient outro that is almost seven minutes long. In most cases I would say it is a waste of time, but I think I was ready for a break this time through. I will round this album down to a 7.5. You might be into the sound of this kind of death metal and perhaps that is all you need when it comes to this kind of music. Otherwise, this is not a strong case for metal being able to come out of Chile .  If you want mena ugly death metal and need little else you might like this one more than I did.