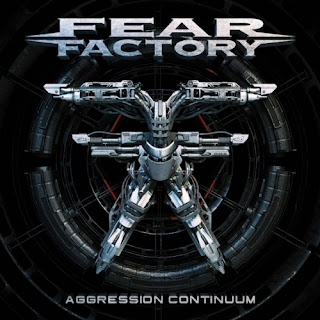 These guys used to be a death metal band when they first started and aside from their more industrial groove leanings they typically still are, Burton C Bell's clean singing plays a larger role at times which is really the only thing that keep from sealing the deal. Thought these guys popularized death metal using clean vocals  at times as a good cop/ bad cop dynamic. Ggoing into this I assumed it was going to suck and I really have not paid a tone of attention to what has been going on with this band in the past decade. I do know that Burton left after this album was finished, so there was drama in the studio I am sure.  While they do stick to the same formula they have been using for years. the first track is pretty impressive and feels that they actually gave a shit about that song.

From there the groove metal tinged black black follows the blue print and is pretty heavy. At time a riff or two will remind me of nu metal in the more Slipknot sense of the genre. The title track works , but doesn't feel as inspired as the first song. Once you are mid way into most of these songs there are little surprises you pretty much know what you are going to get. The synths are really present in the mix. I dod like when Burton strays from the barking and gives the vocals more purpose on "Purity". The guitars are a little on the stiff side. "Fuel Injected Suicide Machine"  is pretty dialed in to meet expectations. "Collapse" is pretty stompy, like it came from when death metal tried to co exist with nu metal in the late 90s . It works for what it is . "Manufactured Hope' is another formulaic clock punching, but they are still good at what they are doing.

In some ways this album is heavier than their more recent work, in other's it is not because of how high the synths are in the mix. There is some riffing that is just as taunt as anything they have done on "Cognitive Dissonance" . The chorus is a little bright , but I can hear how it would grow on me. One of the album's best songs is "Monolith" everything just comes together in the right way for them.  They know how do dial in all the tones in such a way that it sounds like their classic stuff at all times, aside from the mixing issue with the synths. The key for them is can they put it all together as needed 100 percent of the time?  I am giving this album an 8.5 , which means they put it together spot on 85 percent of the time , which means 3 of the songs did not do much for me, if you are a fan that number works for you I am sure as it is better than no album and serves as a decent parting place for Bell.