Death is June - Killing Addiction- "Mind of a New God" 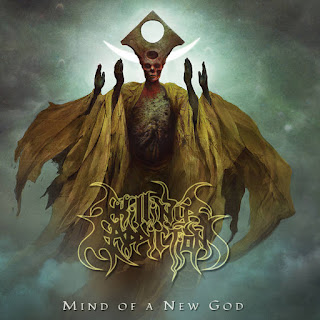 After clicking on the first song I knew this band was not going to be the brand of death metal I was looking. Unlike many young people of today I am capable of gritting my teeth and listening to something that might not fall along the lines of what I want for my paradigm of the world today. I can even finds some elements that are worthwhile of redemption. The school of brutal as fuck death metal this comes from descended from Cannibal Corpse, whose earlier work I like then once Chris Barnes left has been hit or miss for me. Once I am three songs in the very straight forward one dimensional approach to death metal this band employs gets old fast for me. I have reviewed many death metal albums I like this month. They were from bands who sometimes had to be ok with sheer heaviness alone being compromised for the sake of songwriting. I think heaviness alone is the formula this band applies to songwriting.
Some riffs are hookier than others. The low gurgled growl of the vocals , is a one trick pony though on "Prophecy Armageddon" they contribute a little more to the song. It is not surprising that this band is from Florida, though not Tampa. Yes you can mindlessly bang your head to " Destroyer of Worlds" , but it sounds like every faceless death metal band that stuck to closely to the formula they did not create their own identity. Yes, I can hear Morbid Angel influence in this, but the thing is I already own all the Morbid Angel albums so why no just listen to them?  When they bring the speed infused chaos , I am even less impressed. They do slow the riffs down , but they are so generic in the first place I am bored. Now if you were to ask me is this band good at playing generic death metal, then I would say yes.
I begin to lose where I am at in the album until some of the more deliberate riffing of "Condemned to Nothingness" catches my ear. The vocals use different phrasing as well in a few places . The muck of stock death metal riffs and little dynamics continues the deeper we go into the album. I will give this album a 6.5 , it is not my thing when it comes to death metal in 2021, since  I got more than my fair share of this sort of thing back in 1991.
Posted by Wilcifer at 3:09 PM