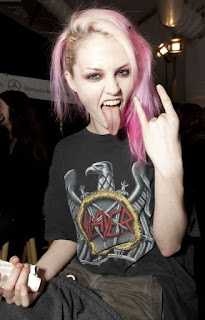 This is the second installment of the Top 20 Slayer songs. I said pretty much every thing that need to be said to lead into this right here... I have noticed the top 10 have shifted some as I listened to them while I was putting this together , moments of "oh Wait this song really is better than I thought", I have been listening to a ton of Slayer the past couple weeks so I have heard these songs several times on top pf the 35 years I have been listening to Slayer. so here ya go
10-"Spill the blood "
From- South of Heaven
This might be one of their mellowest songs, but it is on here for a reason, this is not only one of Tom's best showings in the studio, but some of Dave's best drumming as well.
9- "Gemini "
From- Undisputed Attitude
Another serial killer love song, this might be their most under rated as it is buried among the punk
covers .
8-"Temptation"
From- "Seasons in the Abyss"
One thing that has always given Slayer the advantage over many of their heavier minded peers , is the lyrics are better and vocals have more purpose, the way the vocals have a call and response feel to them make this songs and empower the crushing riffs
7- "Behind the crooked cross"
From - South of Heaven"
Not only were they one of the heaviest bands going when this came out but they proved you can still have catchy songs at the same time.
6- "Disciple "
From - God Hates Us All"
As you can see there is not a ton of stuff from the post "Seasons " years , but this is one of the best the chorus obviously rules .
5-"Angel of death"
Frim - Reign in Blood
The scream, the double bass and the riff , yes all are killer, but while it might be their most well known song that doesn't mean it is the best
4- "Mandatory suicide"
From - "South of Heaven"
Of course the top 4 have to also be the four darkest songs . This also happens to have groove.
3- " Dead skin mask"
From - Seasons in the Abyss
The best of the serial killer love songs. If it was the top 20 darkest Slayer songs this would be number one
2 - "South of heaven"
From -South of Heaven
Truth be told the reason this one got beat out was because, the number one song is the first song that got me hooked on Slayer
1- "Die by the sword"
From - "Show No Mercy"
I was 12 and would listen to a metal show that came on the radio and record onto blank tapes making mix tapes. This song was on one of those and I would rewind it and listen to it over and over again. I think it serves as the perfect calling card for this band and aged the best of all the songs from that album
.
Posted by Wilcifer at 7:32 PM