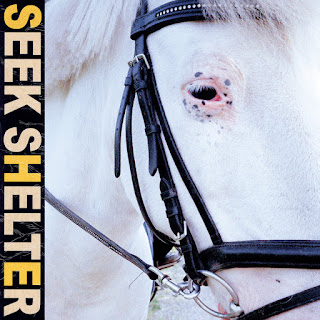 This has been out a minute, but I finally got around to getting it from their label. It opens with more of a depressive Rolling Stones vibe. In some ways this is a testament to how they have grown from a punk rock band to being able to pull off something with this kind of lushness. "High & Hurt" is the first song I heard from this album, I found it curious how it combines funk with country I said to me wife when I first listened to it this is funky Iggy Pop country. They have been throwing a kitchen sink of sounds at you ever since Elias indulged himself with his side project the Marching Church that threw the gates open for this kind of experimentation. The more ballad like tone to "Love Kills Slowly"  feels almost like something Bright Eyes would have done .

"Vendetta" is all drug sleaze and swagger, which isn't that what rock n roll is supposed to be?  Things get marginally lighter on the more elegant guitar tones of "Drink Rain".  Vocally it kind of wanders around with it's own romantic notions making it not as catchy or urgent as the other songs. Touches of country resurface on "Gold City". There is still a drunken slur to his phrasing on this album, but it is not as mumbled as it was in the past. The chorus of this song really sets this song right. "Saint Cecilia" sticks to the same kind of raw and moody rock n roll they have been kicking out the jams to the bulk of the album thus far.

They back off from that same rock n roll vibe to get a little more introspective. 'the Wider Powder Blue" is much more melodic even with the brief bursts back into rock n roll that this song builds back into. There is a really weird drone to "the Holding Hand' that closes the album. It builds up into more sonic movement , but is the album's weirdest song.  I will go ahead and round this up to a 9.5 , as some of the albums more introspective moments will still need to grow on me.