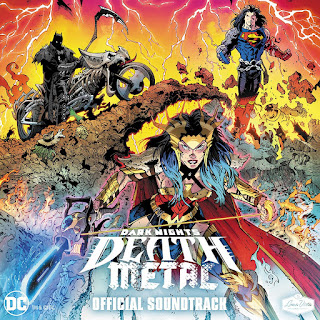 Here is a sound track to a comic book. I am reading the series now and it is the normal D/C style of writing that feels like a kid just threw a bunch of action figures on a a bed to make them fight. There is also not a single death metal band on this album, despite it's name. The first song is Mastodon who tackles a song about the demon Neron. It is more like older metal Mastodon and not like the more recent prog Mastodon. Troy sings this one so it's his standard baritone bellow. Chelsea Wolfe croons a ghostly ode to Wonder Woman, that has more electronic elements than I expected. The fact it stands up against her other work means this is not a throw away song , but something she put love into.
Tyler Bates is all over this album, he played with Marilyn Manson if you need a point of reference/ He teams Chino up with Health for a song about Darkseid,  and it is very loosely based. HEALTH handled most of the heavy lifting and Chino is just back up vocals for the most part.  Their vocals work well together.  The first missed shot is when Tyler couples Maria Brink with Anyd from Black Veil Brides, perhaps a better singer might made this work better, Maria does fine, but he continues to suck.  I first thought Grey Daze was a much improved Rise Against then I realized they were not ripping off Bad Religion. There is a slight hair metal tinge to Grey Daze sound that I like though the lyrics are stupid.
Rise Against does what they normally do when their track follows and that is rip off Bad Religion.
Manchester Orchestra brings a little more balls than normal and does pretty well with the dramatic  alt rock of "Never Ending".  Denzel Curry tries to be Death Grips and the results are almost unlistenable .  Carach Angren plays it a little too safe when it comes to 'Skull with a Forked Tongue" while they do better than most of their peers would have it is not their best song and lacks what makes them unique, the production is also odd.  Starcrawler sounds less like Joan Jett here and more like Hole, though there was some of that on their album. Gunahips team up wit Dave Lombardo needs to be more of a permanent thing. It is one of this album's strongest songs. Greg from Dillenger Escape Plan is clearly just filling in for the cancelled Marilyn Manson on "Now You've Really Done it" as it's Manson's band backing him.
Idela and Show Me the Body both sound like drunken New York cab drivers trying to cover Joy Division, despite the fact these are original songs that were written obviously while they are wasted, I much prefer the poppier sounds that Soccer Mommy conjures up  as their brand of dream pop is fairly polished. I am not really sure what the point of this album is thought their are the happy accidents here that make for great songs , I will give this an 8.
Posted by Wilcifer at 7:48 PM