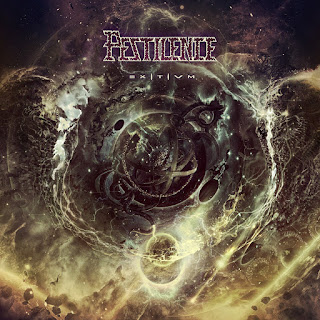 Patrick Mameli is Pestilence at the this point as he is the only original member. This was also the case for "Hadeon" and that was a great album. I do not need to weight this album against 1989's "Consuming Impulse" I am perfectly fine with this album standing along side the more recent "Hadeon". There is less of a sci-fi vibe going on here and they are going more directly for the throat as the maze of twisting riffs comes for you in a full frontal attack. There isa angular dissonance to many of the guitar solos that I appreciate.  New bassist Joost Vander Graaf formerly of Dew Scented, debuts here. His playing is buried under the fast attack of the riffing. They take less twists and turns on the second song and focus on taunt riffing and more groove which plays to their favor. The vocals are more forward in the mix, almost like an Obituary album.

Another new edition to the band is guitarist Rutger Van Noordenburg. The rifs on this album are faster and more aggressive than those on "Hadeon". They are also not as catchy. The guitar solos are  more adventurous. There is a segment of the metal community who will be sold on that fact. I am not numbered among them. I am more interested in songs. Songs times this feels more like an athletic event. "Mortifervm" is the next piece that feels like a song to me. The key is  the syncopation they use to punch into certain parts. They continue in a direction that is more effective song writing with "Dominativ Submissa". The new drummer hammer most of this album with relentless double bass. He rips around his kit in a very Neil Peart manner.

The album does find it's groove three songs in. There playing can never be called in question as execution is machine like in precision. This brings the question how much feeling do you need in your death metal? This is not to say they are intense and commanding as that is a vibe here. "Inficiat" has strong riffing and composition all the way around. The title track might have to grow on me, but it feels like the emphasis is on the gas pumped into the driving verse riff and is not as impressive as the previous song. The last song finds them not letting up on the  raging momentum. While this need for speed will appeal to some, I think, the more groove and song focus "Hadeon" made for better listening.  I will round this one down to an 8.5 , for this reason. It is still an impressive piece of work.