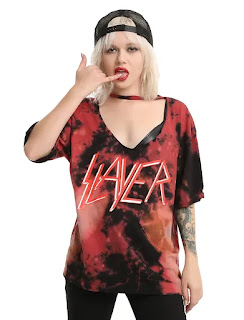 Slayer is not death metal. I know this . They are however the band which influenced the genre the most. Darker , heavier and faster than their thrash peers, they opened the door for bands like Morbid Angel to bring the evil. They used to be one of my favorite bands, but as a teenager when they came out and said the whole devil worship thing was a gimmick, I was pretty set with them being poseurs. By the time "Divine Intervention" came out I had mended this fence, then over the years the quality of their work declined and began to sound like dialed in punk with metal guitar tones and production, lacking the darkness and depth of their earlier work.
Now I am digging back into them and taking what I like and leaving the rest. So here are their top 20 songs. These are not in order pf popularity as I do not give a shit what the rest of the world wants to hear these are the songs that make them stand out from the rest which is why they are my favorites and since this is my blog where my word is law then if I say these are the top 20 Slayers songs then that is what they are. Thank you to being one of my 380,000 readers who give my word more weight , because if you are one of my readers then how can I be wrong ?
20-"Desire"
from - "Diabolus Musica"
One of  the non- nu-metal songs on this album, it 's creeper than the rest and in fair warning the more serial killer love song tone their songs have the more I love it.
19-"Criminally insane"
From - Reign in blood
Serial killers are obviously a popular topic for them, this one is more in your face , but very memorable
18-Hell awaits from - Hell Awaits
The title track from an album that is a major influence on death metal in terms of the sheer speed and aggression they attack the songs with , this one being on of the album's best
17- "Post mortem "
From Reign in Blood
Having some of metal's most memorable riffs, on an album where they hit you at full throttle they show they are capable of being more deliberate and making the riffs stick in your head for years to come
16-"Necrophiliac"
from- Hell Awaits
The best song off the Hell Awaits, album and as a kid hearing about fucking a sinful corpse was next level shit. Another example of how they write riffs like no one else
15-"213"
From - "Divine  intervention"
here is another serial killer love song, without question the best song off this album and it is about Jeffery Dahmer, winning all round, Slayer really uses these dynamics well
14-"Blood red"
From- "Season in the Abyss"
Angry war songs is another Slayer staple. they began to stray from overt satanic imagery on South of Heaven, war and romancing the horror of it had always been a theme but it began to take center stage thanks to Jeff, the groove on this one finds Slayer at the peak of their songwriting , there were never as consistent after this album
13-"Aggressive Perfector
From- Haunting the chapel"
Listening to this years later I might prefer the Live Undead version over this Haunting the Chapel one , but since it is the album it first appeared on I will include it here
12- "Altar of Sacrifice"
From- Reign in Blood
Learn the sacred words of praise hail Satan
11-"Raining Blood"
from - Reign in Blood
The title track to their most popular album should be number one in the mind of their dumbest fans , who are easily appeased by a those riffs, but as a whole song vs other whole songs with more dynamics the next 10 songs beat this one out
Posted by Wilcifer at 7:50 PM