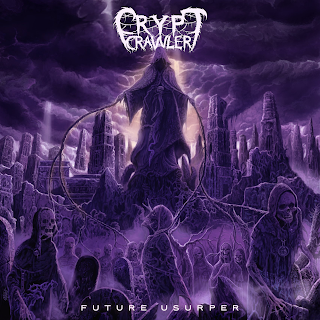 Right from the bass intro they have my ear because they are not opening this going for the throat. It is not to say they are not capable of doing that they just bring more to the table. I suppose this would fall under progressive death metal, though they are not too mathy or wanky.   Midway into the opener the show they can pick up speed with a very thrashy riff. In the first song alone they prove themselves capable ot hitting all the marks you might want from a death metal band. The vocals remind me a little of Death in their harsh scowl. The songs are memorable and catchy. The guitar work is great. I am almost sold on the first song, though the question is can they prove to deliver like this all the time or is this a bar they are setting too high for themselves that the rest of the album will not live up to?

They are a tightly coiled aggression machine with all the hooks that old school thrash used to dish out, but run from a filter of classic death metal . They keep this big epic maximum head banging momentum going into "Force fed to the Dead". Death metal about zombies works for me.  'Delirium" introduces more melodic elements from the guitar. There is a doomier tone, though this is not navigated as smoothly, in some of the more angular turns, though on second listen it was not as noticeable, though the death metal parts, sound more like everyone else/. I like the darker tone going into "Inherent Complexion". They end up taking off with rapid violence from there and steam roll you.  'Choir of Reprieve" is the first where it feels like they just kind of fall into the speed trap of most death metal bands and have a more monochrome  This is given more of a contrast by the wider range of dynamic sonic colors in 'the Avaricious Ones".  It still succeeds at being heavy though the riff has more of a moshy swing to it.

The riff to "Horrors of Humanity" is catchy enough , but it at first felt like a continuation of the previous song. The lyrics are easy to discern with the articulated rasp of his growl. The guitar solo is very Kirk Hammett. The deliberate riffing of " The Illusion We're Under" shifts into more progressive passages are more fluid than some of the album's others turns towards this. "Once Shadow Now Flesh" is not the album's most adventurous song, but it is catchy and works well.  I will give this album a 9.5, making it one of the best death metal releases so far this year. If you like melodic death metal with progressive touches, then this is a must. This Austrian band has a future for sure.