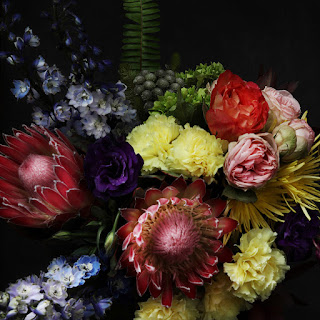 It's been 10 years since the last full length from this "band" , so we will take what ever we can get. The opening track leads you to believe we are one step further in this progression into darkness chronicled in the 2018 ep . "Night Light" has a more more upbeat new wave feel to it that would not have sounded out of place on the soundtrack of a John Hughes movie. "Psalm 234" comes back stronger with a thick groove that is hard to resist being moved by and is the strongest of the first three songs. Despite being aided only my multi instrumentalist Amy Lee, this album has a more organic feel to it and at times fools you into thinking this might be the work of a full band.

The strum of guitar on " Love is All " creates a feeling of the Cure mixed with Death In June. The synth melody that floats in the background being the Cure like element of this . The guitar and vocals the more Death in June like portion of the equation, though in fairness to  Wesley his voice lends itself to a more accessible melody.  The first moment that does not feel as inspired as the first 4 songs is " Happy Birthday Darkstar" is feels like color by numbers dark wave  that just kind of  drones on the beat which sounds a Yahama darkwave preset, if such a preset were to exist. It is not a bad song, I just hold the bar a little higher for this project, it is not like there has not been ten years for the best of their inspiration to ferment.  I am not asking for a lot here, because, "Honey Flower" does use some of the the stock and trade goth standards of songwriting and his vocal melody twists them into  the for of his own personality enough to make it something more worthwhile .

Um the choir synth patch kind of makes " Promised Land " sound like Dollar Store Sister's of Mercy, until his vocals come in  and while they do not veer wildly from the Sister's template they are infused with enough of who he is to work for me.  I will give this album a 9.5 , it is strong enough to make it worth the wait. Not perfect only because the bar is held high for what I expect from this project to the moments it lapses into what every other retro goth grab would go for it distract me, you might be young enough to not know any better then this might be the album of the year. I might be nit picking and my expectations after looking forward to this one might have flared a little but I think this album will grow on me and I love the fact it is darker more often than not .