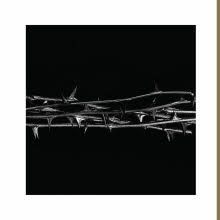 Right from the first song it is obvious they have continue to grow musically. The added the girl from Oathbreaker to lend her voice and it creates a more Swans like atmosphere. At most is a big word for this album as it is loaded down with it, the indulge themselves in ambiance and take their time getting to the meet of the matter. When they are in the song it is cool as hell but it takes a minute to get there. They were killer live when I saw them touring to support their last album to the point that they blew Voivod and Yob off the stage. I am not sure how this would translate as it would make for a great deal of dead air when they are doing these spoken word pieces. In fact the second song is just an ambient interlude but almost 5 minutes of one.
It is a good thing they waste no time and come in crushing it on the song that follows, as I was at the atmospheric threshold of what would have worked for me. You know I love for things to be sonically heavy more than heavy metal, so the fact the bass is more burly and allows the guitars to play dissonant melodies works for me. Colin's clean vocals have really improved as he project more and is not singing in the fragile Sigur Rios like voice. They find a balance of atmosphere and song writing on "Het Gloren". It is a sprawling 11 minute song and maybe a minute of that fat could have been trimmed off. They lurch into a downtrodden take on sludge that I can get behind, even though it drones.
This use of restraint is forgotten as they go back to somewhat ponderous ambiance setting the stage for spoken word. It does build out of this eventually , but it is a great deal of time wasted when metal is much better served when it gets to the point. I am not sure that we need six and half minutes of a 12 minute song , with poetry being read. I think we could have accomplished this in seven minutes and made for a better listen.  I will give this one an 8.5 as it is pretty stunning when they do lock in on the more moving heavy sonics, it is just inconsistent in that regard and seems like it would not be as powerful experience live
Posted by Wilcifer at 6:52 PM