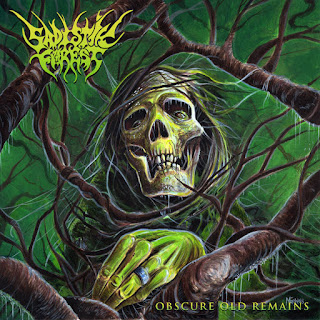 This is one of the bigger names in the Finnish death metal scene that seems to be gaining a great deal of momentum. The first song finds them faster and perhaps more thrash influenced than the other Finish death metal bands I have been checking out this week. The scowl of the vocals is perhaps not as guttural  and reminds me more of Carcass or Death in the tortured way the lyrics are spewed. When compared to Ghastly and Revulsion these guys are clearly the most tightly coiled machine. The emphasis of where the riff punches is really the only major shift from the first song to "Barbarian". The guitars are pretty dizzying and the drums race to keep up.

"Nihil" begins to show how their strength can also be their weakness as a band. Yes the are the most tightly oiled machine of this crop from Finland but they are also the most likely to burn out from keeping their boots to the gas. This fact might be harder to hear since this is just an EP. It is much easier to digest 4 songs of this than it might be ten if they planned on attacking your ears with the fury they approach the first three songs with. It is the fourth song "Waters Black" that they shift to a slower speed and steer away from just hitting you like a speeding juggernaut of sound. They create something that would not have sounded out of place on Morbid Angel's "Domination"  album , so darker and more deliberate.

Since this is only an EP and I  was wisely not given the chance to burn out on they relentless onslaught then I can give this album a 9. If this had been an entire ten songs would this have scored as high if they kept doing what they were doing here? No, they have a refined sound, and still care about songs, but in a future full length I would want to hear a little more of a dynamic range from these guys, but there is no denying that Finland is coming into their own in terms of Death metal.