Death is June- Crypta : " Echoes of the Soul" 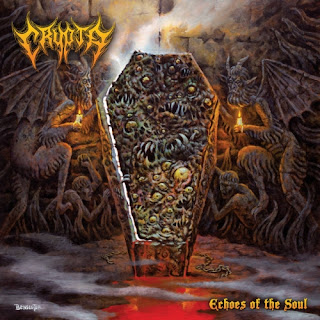 The bassist and drummer from Nervosa, broke off to form this band. Most of the members are from Brazil except for their token blond from the Netherlands on guitar. More death metal than Nervosa  The opener is a full speed ahead fest. The vocals more black metal due to the higher snarl, when they go a little lower they are like the demon voice King Diamond uses on "Them". 'Possessed' has more melody thanks to the catchier guitars. The drumming also stands out as being more noteworthy on this song. "Death Arcana" is like a more thrashing version of Morbid Angel. She goes down a little lower on this one for extended growls. So she is capable of doing them. They also offer some expansive riffs that break away from being locked into to hyper speeds.

There are more lower growls on "Shadow Within". Yes they can play fast, but this is not the album's catchiest song writing and begins to sound a little like everything else. I have to go back and listen to " Under the Black Wings' three times to form an opinion of it. The more deliberate riff works better than the previous song, but it is a little too straight forward. The pace picks up for the more blackened "Kali". It grows on me , but is not the strongest song on the album. They continue to prove themselves more effective when at a more mid paced chug with songs like " Blood Stained Heritage"

They lock back into the hookier thrash chug on "Dark Night of the Soul" though it is pretty close to what they did on the previous song .  The last song is not as impressive and plays off of the color by number metal hand book for genre typical riffing.  What they have recorded is well done if not original. It grew on me enough to give this album an 8