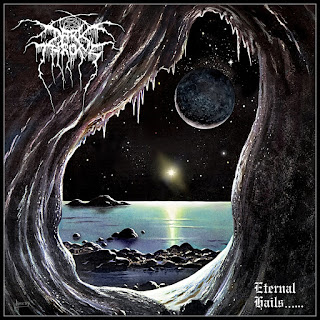 I recently read a reviewed where bands like Possessed were called proto death metal, which this album could also be filed under as it owes more to hat than black metal at this point, thought the New Wave of British Heavy Metal can still be found in the dna . But I also hear the early roots of black metal such a Celtic Frost and Venom as we get deeper into the first song. My only qualm going into this is the production. I know they are into doing every thing themselves. Even then they have sounded better . There is more of a woozy doom rumble to "Hate Cloak" I do like the fact it is darker. Midway into it they lock in on a cool thrashy riff. I am not sure guitar solos are really there thing though. I am also unsure if it needs to be a nine minute song as it feels like they have said everything let to say at the five minute mark.
There is more drive to "Wake the Awakened".  Fenriz stated he was unlearning playing the drums by only doing it when he was recording. I believe that as the drumming is cruder and more punk this time around. There is more of a black metal feel in some places, he does not use many blast beats , if at all. I like  this ride work on this song. Some of the guitar tones are really rough, but I think that is what they were going for. I am sure Darkthrone could have sold out and brought in any metal producer they wanted and have a full band, who in the Norweigan Black Metal scene would turn down the offer to play with them? Ok Varg aside.
Sure there isqa cool riff midway into " Voyage to a Northpole Adrift". but it feels more like they are just jamming at the practice space and recorded it. I might have rehearsal tapes that have a better sound quality. The guitar solo in this one is however much improved thought that is not going to make the song, the fact the riff sounds like Mercyful Fate has more appeal to me, There is way more of a Celtic Frost thing going on with the last song. The thing is I have all the Celtic Frost albums so I would rather hear more of a Darkthrone album.  The riff at 1:45 is way too happy. They do make up for this with the creepy riff they jam out on at the end of the song that is almost more death rock like.  However due to the we are just going to jam around quality of this album I am rounding it down to an 8.5 , not sure if I have rated a Darkthrone album this low before, but even then it means 85 percent of the album is solid, maybe only one song I am not as into, but granted when therei sonly 5 songs they have to sount more.
Posted by Wilcifer at 6:33 AM