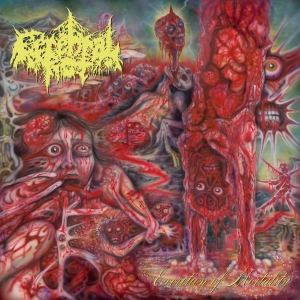 The last album for Death Metal month ! Circling the drain around death doom , more often than not , at first I assumed this Swedish band's sophomore album was going to be solely focused on heavy. They play a slower and crushing for of death metal that pays homage to the classics, without directly citing anyone band, though Incantation might be the core influence if you were really to dissect it. The vocals are the kind of low gurgled growl you want from death metal. The guitar solos have the kind of chaos that might being Morbid Angel or Slayer to mind, thought they are not emphasized. You are going to remember this album for weighing on your ears , not for the guitar solos.

While the drumming is top notch as death metal often demands , the bass player might be the unsung hero here. His rumble cuts through and adds another layer of density to what is going down here.  The bass makes it self know even more on "Spewing Purulence". The vocals come across more like a Chris Barnes thing where they are not really being projected from the guts, but growled up on the mic. An almost breathy quality haunts them. It is not until "Bowels of Decrepitude" that they fall into the same trap most death metal bands to where it becomes too single minded in it's aggression and a heavy wall of sound.

It is not until the bass break down in "Drowned in Malodor" that it sets itself apart from the color by numbers death metal . There is a little more of a groove.  Though I think the density was more impressive on the first listen through to this album. "Retching Innards" has am almost Entombed like sludge to it's groove. Yeah I know Entombed is not a sludge band but there guitar tone is sludgey. Their vocals are not as memorable as Entombed's.  What is more memorable on this song is the drummer's Lombardo like use of the ride cymbal. The last song is the most sprawling . At four minutes in they are still farming out riffs to jam on before a guitar solo comes in. While I am not sure the vocals contribute a great deal but waiting six minutes for them to come is , makes me think editing could have been more helpful here. I will round this up to an 9, as for being so brutally heavy it is one of the better death metal album's this year. Being released on 20 Buck Spin.