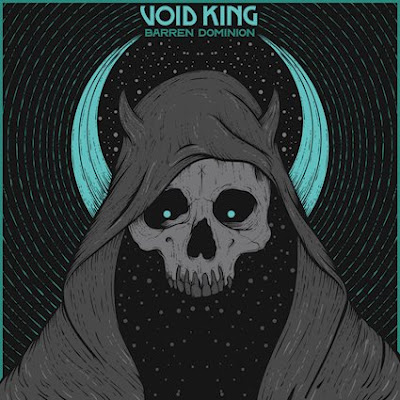 For obvious reasons November is going to be the doom month here. I though about holding this album out until then, but decided any doom I find in October I will hold back for November since October is our goth month. Here is a band that stands because they set Alice In Chains like vocal harmonies against a rumbling doom back drop to stand out from the pack. Sometimes they do fall back into a more Solitude Aeturnus sound , but that is fine . I prefer that to the moments they begin to speed up and ruin the vibe. The first song alone has an impressive dynamic range. They fit it all in under eight minutes proving even with doom you can squeeze everything in under ten minutes rather than the 15 minutes sprawling pieces doom can be guilty of.

When I look up to see what song I am on I find it's the 3rd , which means the second blended in with the others. Meaning the tend to have a uniform sound. While the vocals are strong they tend to stick to the same time of bellow being belted out.  It does get heavier toward the end of "Burnt At Both Ends", before the it drops down to drum, bass and vocals. The pace picks up in the direction power metal on "Of Whip and Steed" .  "Temple of Bone" is less engaging as a song. The vocals kind of aimlessly howl into oblivion. They begin to turn into a band that has a sound , rather than a band that has songs. "Learning From the Ashes" is better , but I get the sense the vocals are just there to have a voice rather than forming melodies that hook you in and keep you returning to a song. This is where growling is just as effective as singing.

He is capable of delivering a more song oriented vocal melody as he does so on "Crippled Chameleon" . When he adds a bluesier touch to his voice it helps.  The last song is heavy and growled vocals double up the sung ones, but once again nothing hooks me in and heavy only goes so far. I will round this down to an 8. It is enough to scratch the doom itch in a way that is not like every other Sabbath worshiping band you have heard, In fact there is little Sabbath in their DNA. That might be a plus or a minus depending on wha side of the grave you fall on that one.