Coffins : "Beyond the Circular Demise" 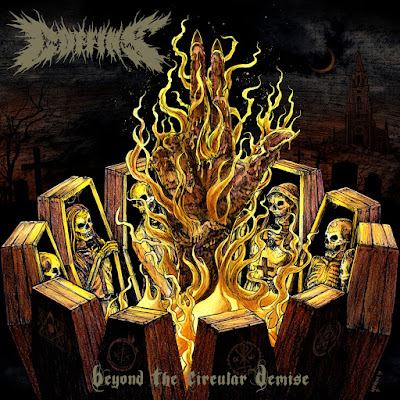 I was prepared for the filthy grit of this to be a bunch of brutal churning with out anything to hook me in . That is not the case. I should not be surprised as this is their 5th album in 20 years. One every four means they take their time in the studio. The opener is more straight up death metal with punk touches . "The Tranquil End"i s slower paced with a doomy feel for the first half but they speed things back up into death metal. I know there has always been a fleeting flirtation with doom , so these guys are not jumping on the death doom bandwagon, in fact this album is more death metal than I remember their rumble being before. Though I have not really paid a ton of attention to them.They return to this dragging doom sound on " Forgotten Cemetery" it does not stay there for long. They soon speed up into their blown out style of  death metal. The vocals stay at their low grunt.  There are some cool angular touches with guitar lines.

What I like about their sound is it is organic, yet dark and dense. When they lock into a mid paced chug , it is probably their best quality. They do not do it every song , or even every other song, but when you hear it there is no denying this fact. It is heavy as fuck. Not to the point they have thrown the song out the window either. At least on this album they ow a lot to Incantation, though there sound is more condensed than the more spacious dark of Incantation's earlier work. "Hour of Execution" doesn't stray too far from what you know they are good at. Even they are slower this still sounds more like death metal. When the riffs picks up it's a memorable riff. "Insane" has way more groove than I recall these guys having . Some of the more abrasive feed back and fuzz from the guitar sound has been polished back making this a more use friendly effort.

"Birth Postmortem"  has a heavier grind to it than the previous song , but still carries a great deal of groove. The album closer "Gate ways to Dystopia" has a more rambling sludge like tone dialing in more rock than death metal. Aside from the vocals which have stayed the  same for the entire album. For death metal they can get away with it. The groove shift , but they pretty much find their way back into the kind of death metal this album has found them to now be. I will round this one up to a 9.5 as they have become a lean mean death metal machine./ This comes out September 20th on Relapse Records