Pixies : "Beneath The Eyrie" 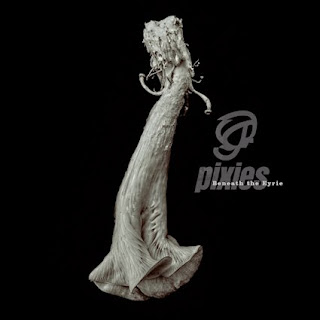 I started listening to the Pixies on 1991.This  is almost that line up except for Kim Deal who is not in the deal and was replaced by Paz from A Perfect Circle. The second song sounds more like the band than the opener. Black's gains a little a little bit of grit , though has mellowed with age. The production comes close to replicating their original sound, but something is a few degrees off. "Catfish Kate" finds the band continuing to remember who they are. This is a broad target for them to hit considering the band's sound could vary wildly from song to song. What is weird is when you hear the influence of another artist come in a side track them. In the case of "This is My Fate" it is Tom Waits who is throwing the curve ball. Black even adds a lower rasp to his voice.

"Ready For Love" reminds you that behind all the quirk these guys were always good song writers while they transcended their late 80s indie rock pioneer peers. The country to twist to "Sliver Bullet" works well as they still add punch to it and this is so far the first song I really feel holds up to their legacy. "Long Rider" also embraces their more classic sound. Though is on the more upbeat side than the previous song. Paz takes over the mic on "Los Surfers" . It captures the feel of the band. Her harmonies with Black earlier in the album also worked well. I am fine with her replacing Deal. They go for a more rambunctious rock aggression on " St. Nazaire" . Then relax into the more country inflected " Bird of Prey" which the better song of the two.

I do not need them to write another "Gouge Away " or "This Monkey's Gone to Heaven". I am fine with them getting older and writing songs more like "Daniel Boone" It's well done and true to who they are. It ends with the acoustic based "Death Horizon" which almost sounds more like a Tom Petty song. This grows on me with each listen and feels like it stands up well against there other work so I will round this up to a 9.5. Obviously "Doolittle " is a 10.