Cold ":the Things We Can't Stop" 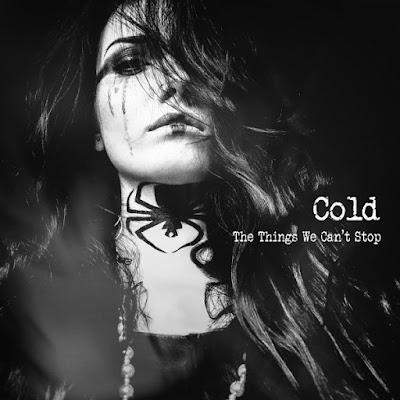 "Year of the Spider" is where I left off with these guys . It has been a minute. They are not as dark as they used to be. The opener still has traces of his voice but over all it feels like stripped down 30 Seconds to Mars with Scooter singing.  The a little more interesting on "Snowblind". They came before Breaking Benjamin, but it sounds like a watered down of that band. I have not looked at any p/r notes on this one, but it is safe to say Ross Robinson has nothing to do with. The guitar tone is pretty wimpy. What has worked wuth his voice which was more limited early on what the fact he sounded more like a gritter angrier version of Gavin Rossdale. What he now does makes the songs sound the same. If you have ever tried finds torrents of this band's older stuff online its hard. Or else I would stick to the first three albums.

He is much better when he sticks to his baritone. This helps the otherwise Cure like "Run" . The chorus is hopeful where I want them to be depressed. .The hopeful chorus on "Better Human" is once again problematic. What I want from the band shows up on "Without You "  The power ballad "Quiet Now' once again injects a soaring sense of hope that does not resonate with me. I need hopeless when it comes to even my radio rock . This is boring. More acoustic strumming does not sit well going into "the One That Got Away". I know they have been out of the game for a minute, but t should have gotten the memo that what made Staind famous is a formula long gone. This song is melancholy to work for me. But they need to make note of that previous point.  I think compromise between where they are and what I want from them is best shown on "Systems Fail"

The ballads that drag this album down are tedious. When the elements of them that are well done are hard to hear because this seems like a tired formula that should have been left to die in the 90s. The world already has "Home Sweet Home " and "Dream On" we do not need any more of those. If you are into those kinds of things "Beautiful Lie" shows the band bringing a new range of atmosphere, I just wish it had been put to better use. It doesn't suck it is just unnecessary. If you do not under stand the difference between those two concept and how they correlate then I can not help you , go back to sniffing glue. The album ends with another one of these this time moving in more of a Snow Patrol direction. This is actually done even better than the previous one.  I will give this one an 8. It is good to have them back. Their songwriting keeps some of the lighter moods and sounds. I wish they would get angry again, but they are older .