Arctos : "Beyond the Grasp of Mortal Hands" 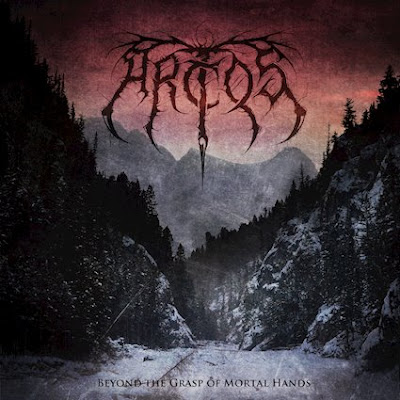 In February we had an entire month of black metal. It seems death metal has been more of a dominant for than either black metal or doom, two genres that I normally like more than death metal. It is time for me to get caught up on black metal. The synth heavy Canadian band gets off blasting in a more conventional form of black metal. The vocals has a snarl but you can make out the words. More growls than screams. I am not sure I would call this atmospheric black metal despite the fact Summoning is obviously a hug influence. There is more meta and potatoes metal, They almost lean in the direction of being a blackened death metal band, but the dark sense of melody tips the balance like the use of the more sung vocals.

The album sounds great and I like the darker vibe of "Shattered Tomb" . Song wise it did not really grab my attention until four minutes in. They have a great deal of  interesting ideas . The guitar solos are well handled. The main challenge is going to be over coming my rule here which  is ...cool riffs alone does not a good song make. The vocals to have a form and function so are not an after thought as they can be with many extreme metal bands. In fact by the 3rd song the sung vocals are playing a larger role in the chorus. The over all melodic qualities are stepped up. This almost creates more of a pagan metal feel. It is not until the more Type O negative like vocals that I begin paying attention to "Autumns Herald " . It carries more than it's fair share of blast beats.

The piano line at the beginning of " a Realm Beyond' is one of the album's darkest moments. The guitar part that follows is more conventional metal, but retain the mood by a few degrees. The more in your face black metal moments remind me of Abbath's solo work. There is more Swedish feel though than Norweigan, as an early Dissection influence is also in the mix. It is clear they are good at what they do. What they do is more original at some moments than others. They do care about the songs and creating music with melody and dynamics so that puts them at the head of the pack. At least with the more recent black metal I have heard. Perhaps not the years best , but if you are a fan of the bands mentioned as their influenced they are the sum of their parts so you will dig these guys. I will give it an 8.5, being released September 20th on Northern Silence Productions.