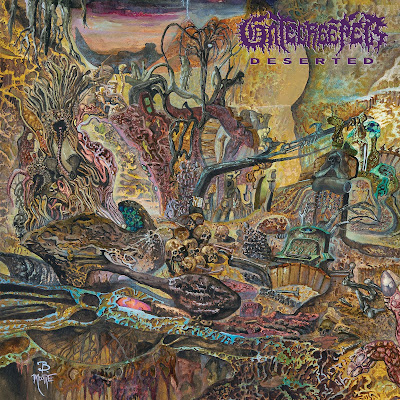 It's been a great year for death metal . The trend continues with this band's latest effort. The title track opens the album. It is dark, maybe not as dark as say Incantation but very convincing. The riffs have some thought in them and enough hook to keep me interested. The production is much more polished and they sound better than what I have heard from them previously. I am hearing a lot more Obituary influence this time around, which is fine since those guys are one of my favorite death metal bands. I think I like "Puncture Wounds" more than opener. Their press kit mentioned Swedish influence and I did not hear it until "From the Ashes". It's mainly in the kind of galloping verse. If I switch back to listening to this album after listening to the new Coffins. It seems to have more mid-range and is not as heavy. This is the more user friendly to the mainstream metal crowd.

The more staccato chug of  "Ruthless" is well done, though as a song it feels like it works of one thing. But it does work well at that. "Everlasting" is back in the more Obituary like place with faster burst interspersed. There is one groove laden riff that could have come from Dissections 'Reinkaos" album  These songs all clock in under six minutes. There are now sprawling drones of pretense. "Barbaric Pleasures" has a cool groove to it , but plays it pretty safe in the context of what they do. It's not very barbaric though it still grows on me with repeat listens . Themes of heat are prevalent in their music because they hail from the deserts of the west.  While they are very good at what they do by the time we get to "Sweltering Madness " the songs are beginning to all sound the same. There are some powerful riffs, but the rule here is cool riffs alone does not a good song make. 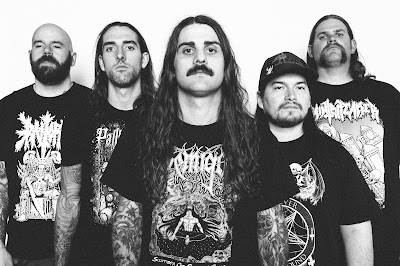 More heat with "Boiled Over". This album should have been out the two weeks my air conditioner was broken as I could have vibed with their pain then. This works better than the previous , but once again there are some cool riffs that get touched upon, but for that to work the entire song has to run off them. "In Chain" they pick up the pace at the beginning of the song and then go into some groove goodness. Overall the song is not as consistent as some of the others.  The last song was given multiple listens and did not really compel me to yearn for more. This album is well done I will give it a 8.5 and see how it sits with me. If you are already a fan of this band and do not see being more polished as selling out then you will dig this.