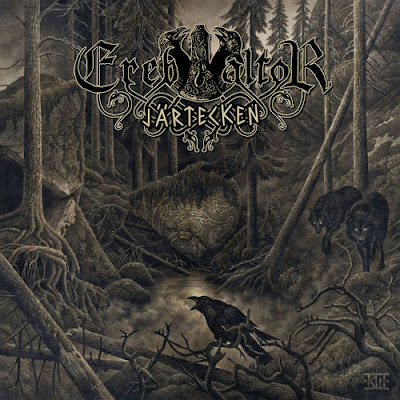 The Swedish band's 8th album find them continuing to lean in a more blackened version of viking metal. Melody is a strong component to their song structure. The way the sung vocals are used reminds me a little of Dimmu Borgir. Meaning the emphasis is on epic. "Queen of the Seas" gets swept away in the raging waters of it's epic nature. It is well done but as a song it doesn't hook me in like the first.  We begin to see the bipolar nature of this album, with the more straight up black metal of " Alliance in Blood" . They are into reinventing the wheel when it comes to black metal , but it is very well done and not just blast beats. To their credit the songs are very compactly written and focused . "Chained" starts off almost like old school metal, some where between thrash and power metal, more thrashing when the snarling vocals come in. It is one of the hookiest songs thus far.

"My Demon Inside" is in a more black metal direction, but not as much as the more ripping "Prepare For War" . This one almost sounds like 1349, though more thrash and less blast. There is a wide range of various metal styling these guys dip into. Pagan black metal is the best sub-genre to describe them. They go from black metal into more epic folk tinged songs that are not a dramatic as say Tyr and tend to trade off between the sung vocals and the growled vocals. The first time I really pay attention to the bass is on "With Fire in My Heart". The folk tinged melody works well for this more mid paced song.

The album closes with "And Blood on My Hand" . This feels more like an outro than a song in and of itself. I will round this down to a 8.5. For black metal it is a little middle of the road though I do appreciate the sense of melody and song writing. I guess it could just be a little darker. These guys are great musicians and if you are a fan then this album will live up to what you want from these guys , since they are already hard to pin down in that department so it gives them plenty of room to try different things.