Heaven's Club : Here There and Nowhere" 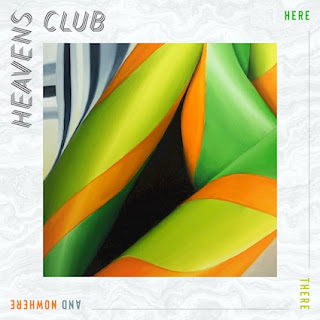 the Drummer and one of the guitarists from Deafheaven started a weird post -rock / shoe gaze project that plays a jazzy version of indie rock that reeks of the 90s. None of that was negative. The synths are oddly new wavey. The vocals are soft and androgynous in their breathy quality so very 90s . The second song is very dreamy, but not as engaging as how the album opened. It does remind me a little of the Death of Lovers second album. The marginal post-punk qualities are glazed over by a weird detached dream state. This causes the verses to flow with a tension then the choruses drift off.The dreamy thing works sometimes and "Good Grief" is a good example of that , there is a touch of Brit pop to it.

The movement of " Here There and Nowhere" helps give the album the dynamic shift it needs. This is the first place you can hear that the drummer might play for Deafheaven. Not that it's metal, there is just a more driving energy to it. "Godiva" is a little darker. It still floats along in the trippy psyche clouds like a great deal of this album, which is more progressive than it wants to admit to it's self.There is a guitar solo that gets drowned in a wave of effects, but it gets the point across. The vocals are pretty much their only weak spot. They sound bored, like they are too cool and apathetic to worry about singing. They still manage to let a melody slip past all these synths. More XTC or even Residents than the kraut rock they were going for.

On "the Frail" when they actually allow things to come together in a more cohesive song the results are more along the lines of The Dears.But is also one of the album's strongest moments. The drummer continues his efforts to bring things together and hold it down . The rest of the band gets the memo here.  "Mother" almost feels like an extension of the previous song , but it locks into more ofa moving groove.  The songs are all fairly compact. The acoustic strum of  the Pink Floyd liek folk of "Strange Times ' is not the best indication of what they do or what this album does best. It's ok not great. I will gie this album an 8.5. It might just need some getting used to as when it does clicked for me it is obvious they are going above and beyond to make their sound .  There are few odd things about this album which are not limited to the fact this is being released on Profound Lore.,