Sleeping With Sirens : "How It Feels to be Lost" 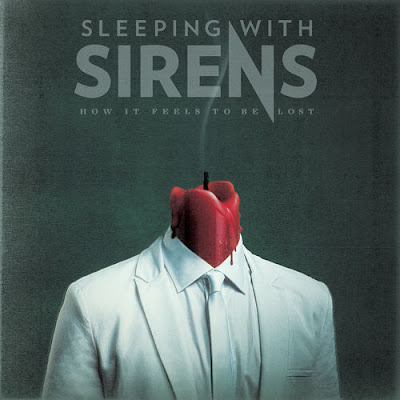 This might not be my thing, but it is well done. Their singer has mastered singing like a teenage boy waiting for his nuts to drop. Despite this they have some catchy melodies. With his  voice it's hard to not think of them as pop. In fact the only experience I have with these guys are those "POP Goes Punk" albums. They are more pop than punk. The singer of Good Charlotte is  on the second. That should tell you something. They are probably better than Goof Charlotte even with the adolescent vocals. However if you have ever made fun or Taylor Swift or Miley Cyrus and think these guys are any where close to being metal, you are fooling yourself. They are closer to Miley than Slayer by a long-shot. The catch here is like pop music.

I think this guys voice is eventually rub me the wrong way after another song. This is well produced, except for the fact, that despite having the Myspace emo cock rock guitar sound dialed in. They are crisp but not heavy. They need more low end. Like all good pop music these songs are in the three minute range. They might pull out a stompy riff here and there, but their purse still falls out of their mouth. Despite how cheesy it is the chorus to "Agree to Disagree" still works for me. If you think Poison is metal, I can see where you might get confused and think the same thing about these guys. You will also win first place as the best demo bottom for the fisting contest next year at Frolicon. They get moodier on "Ghost". This is a good one for cutters. By the time we get to "Bloodlines" what they do begins to get stale.

They try to make some wanna be hardcore. You can not fake the funk. It was good while it last , not the album begins to run out of gas. Electronic elements guide their way back to the more sugary pop sound. I think this side of them is better than when they are trying to be harder, as it sounds more genuine. "Another Nightmare" is a good example of how this works in their favor. The tone of "P.S I Miss You" is a little different shade of emo, yet it does not dramatically stand out as the song plays it pretty safe.  The dichotomy of their urge to convince you they are heavy and their teen pop works better on "Medicine". When they texture things with almost dub step sounds , it actually works pretty well.

Had to still to the last song twice before I paid any attention to it. Sure it has an acoustic strum, but really sounds like every thing else and kind of falls flat on me. I will give this one an 8.5 despite trying to hard to be heavier than they are not what they do is well done and if you are a fan of this band they have given you what you more than likely want from them. If you listen to more pop than emo then you will dig these guys.

Email ThisBlogThis!Share to TwitterShare to FacebookShare to Pinterest
Labels: : "How It Feels to be Lost", 8.5, album review, emo, pop rock, Sleeping With Sirens, sumerian records