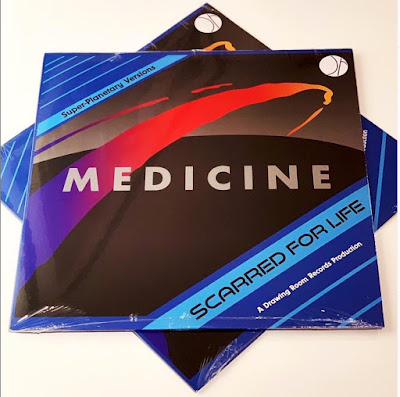 On the more poppy  side of shoe gaze, this band formed back in 1990 and I could go into a tangent on the hole history of the genre, but  I do not have time for that so we will fast forward to what is going on with this this album . It is an album of cover which I did not realize going into this  until I got to the Fran Zappa song. I aam not sure this is the first thing I wanted when I downloaded this album,. To say I should not go into this album hoping for a sense of nostalgia when in fact these guys are basking in the nostalgia of an entirely different decade, makes it a mute point.  There is groove and melody not just opaque droning and a wash of effects. They are still surreal.An ample does of influences from the tripping years of the Beatles can be heard on "Sentimental Lady" .  This is a song made famous by Fleetwood Mac. They prove pretty clearly they are not hiding behind effects and can play guitar as good as any rock band on the Judee Sill song " Deadtime Bummer Blues". This song also shows they are perhaps more psychedelic than purely shoe gaze.

This point is further driven home on Neil Young's " Expecting to Fly". The lazy 60s vocal harmonies contribute to this . It is hazy , but not as dark and depressing as I typically prefer , but the feel of the song still works. The strum of the guitar also question how shoe gazy this really is.  I get that these are covers , but the original versions lean more toward folk. We are both feet in committing to psychedelic on Zappa's "Absolutely Free". There is no way at this point it can be denied.This could have come from England in 1966. I think this might be my favorite song on the album as they did a commendable job. Covering Zappa  proves to be more daunting than when they cover Miles Davis. The clang of guitar and ambling bass line accents the more retro tone  with  the Monkee's"Listen to the Band". There is a much rawer  feel than what Davey Jones and company originally came out with.

Similar is done with the pop of the Jaynettes, "Sally Go Round the Roses" which comes across more like "Tomorrow Never Knows". I am not sure covering Miles Davis is in their best interest, but they do go weird with "Black Satin" and come closer to the original than I expected. I will give this album an 8. If you are showing up for the shoe gaze  drop some acid and then you might get what is going on here. I have done enough acid in my lifetime that I will always get it.