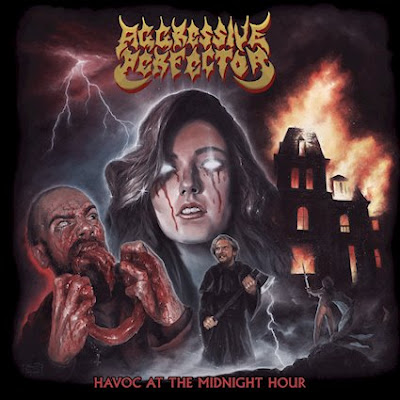 This is the British trio's second album. Named after a Slayer song it's easy to see where they would draw from early 80s thrash. They are more Venom than not. I can hear traces of Mercyful Fate, but the vocalist can not really sing and instead employs more of a snarl. There is a casual attempt at screams and he tries to sing a little more "Turbo Evil" which benefits from a more classic metal riff. They do a really good job at recapturing the feel of the era. I know I was a kid listening to this kind of metal during this time. The vocals however are their weak spot.  The drummer is no Lombardo or even Mikkey Dee. He gets the job done , but not above and beyond the call of duty.

The chorus to "Land of No Return"  reminded me so much of Metallica's "Phantom Lord" that I had to stop and go listen to the Metallica song to see if I was just imagining this. It also allowed me to hear how the production on this album is a lot like that of  "Kill'em All".   There is a more Slayer like groove to the riff of "Into the Nightmare".  This is more effective than when they pour on a more punk tinged thrash speed for " Vengeful One". There is a touch of Motorhead to it. I like Motorhead , but this doesn't feel like it has the same amount of heart put into the song writing process and feels more like filler. They lock into more of a thrashing speed for the last three songs. Sometimes this is more effective than others' "Devil's Basatrd" is smoother than the previous song but still feels a little rushed and a few bpm's slower might have provided more nuance.

"Seven Gates" is more of a gallop and while it is not that hooky of a song , at least not enough for me to look up from my writing and take notice , after repeat listens I can hear how it's construction is more sound than the two songs before it. However it is almost a tribute to Venom. Venom doesn't sound like Venom today so if you are looking for a replacement then this might work. Still I will give this album, a 7.5. If you are a Venom fan it is recomended, If you heard Venom the first time they came out and were already head banging in the 8-0s then this might be less impressive. The album is being released on November 22nd on Dying Victim Productions.