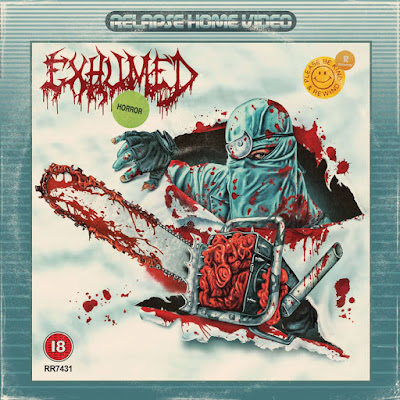 These guys have been around 21 years making this brand of straight forward hyper aggressive death metal, not unlike Cannibal Corpse. These songs are almost like grind core in the sense they are short blasts under 3 minutes. The problem so far is I just left this one playing and so far the first three songs all sound the same. Hyper fast snarling with the emphasis on speed. It becomes a blur and does not grab me. It does become clear that the main thing which keeps them from being a Cannibal Corpse tribute band is the punk like energy they pursue these songs with. On "Red Death" this
translates into giving them a more thrash like feel.They continue down this ultra violent path  and the songs begin to bore me because they all sound the same.

If this is your thing, then you obviously are more into this sound and not into songs."Playing With Fear " is the first song that slows down enough to establish it's own personality. Even then it is done in a way that is a few bpms over mid tempo. They do descend into blasting, but you have to have some to provide a dynamic contrast, which is far and few between with this album. The vocals are largely an after thought on this album, but they do provide some useful accents to give shattered sanity more of an identity along with the thrashy hook of the riffs. A hooky riff might be cool, but the rule here that smacks these guys in the face is cool riffs alone does not a good song make. There is some trade off with the lower grunted Cannibal Corpse like vocal and a higher raps that works better than one style sitting by itself sonically.

I am officially bored by  the time we get to "In the Mouth of Hell". It's all monochrome dynamically and the songs have begun to sound the same. Thankfully they are only a minute and a half long songs toward the end of the album so not having to endure it for long. "Shattered Sanity" is marginally better due to the more hooky thrash guitar part.They are more deliberate with "Re-animated" . The vocals have more purpose on this one. I think a  7 is generous. This means these guys are good at what they do I am just not a fan of what they are doing as I need more songwriting in my death metal.