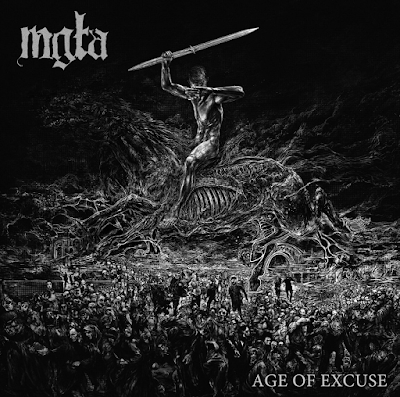 I had to go back and check to make sure My iTunes was not playing the new Abbath by mistake. Their 2012 album "With Hearts Toward None". The more mid tempo grooves that held more death metal influence on that album have not cropped up yet. It is a much more straight forward blitz that does carry some of the  creeping darkness to it, but charges forward with the more militant darkness of black metal. By the end of the second song it races into the kind of furious tremolo picked barrage that hundreds of other black metal bands do. It is well done and executed, but more of a sound than a song. Am I comparing this album to "With Hearts Toward None" and using it as the measuring stick. You bet your ass. If they can make one album that rocks like that they can do it again. The need for speed however compromises what gives them their own sense of identity.

The third song has a cool galloping kind of riff, but the rule here is cool riffs alone do not a good song make. The dissonance of this songs, lulls me in and creates the same kind of hypnotic atmosphere to trance out to that early Darkthrone did. So in that way they are successful and without question this is legit black metal. The question is more how are these songs distinct entities in and of themselves. The question becomes more pressing as the fourth song sounds just like the 3rd. In fact I have listened to this album a few times at this point and the songs have all begun to sound the same once you get deep into the album. The tempos is certainly one thing that doesn't help in this matter. The 5th songs has more of a melodic throb to it. The tempo is more deliberate and there is a spoken section to it so it sets it's self apart more than most of these songs.

At 9 minutes the last song is still not too terribly excessive for black metal these days , The drumming on this one is great. Perhaps not great enough to really set it aside as it's own distinct entity, but good none the less. The emphasis is more on double bass .  Toward the end of the song I can make out the lyrics and they seem to be about human nature. I will round this down to a 7.5 , which considering their track record up to this point makes this a disappointment, if you just want really straight forward black metal then this might be worth checking out especially if you are already a fan of these guys.