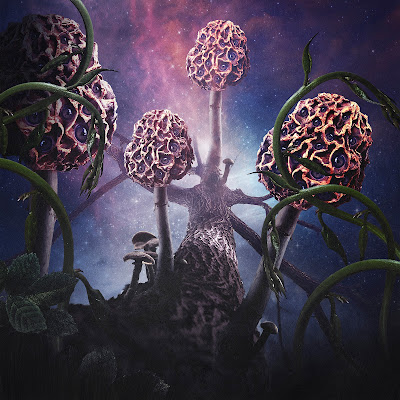 A French band with a German name who sounds like they are from Norway. They are so forward thinking at one point they were not even black metal. They are more blackened this time around thanks to the darker atmosphere they creates a flowing drone and the steady under current of double bass propelling the opening song forward. This is not to say they are not on the more avant garde side of the genre. There is sprinklings of rock against the choral arrangements and vast almost symphonic sound. They have combined many of their past sounds and blended them into something that is true to their legacy, They are more metallic on the second song. Harsher vocals come in , but are off in the distant . The more sung vocals come forward in the mix but not by much. It has been some time since I have heard them this aggressive.

The return to blackness continues with "Sybelius". The album has a odd mix , but seems intentional. The drumming is fucking crazy. Double bass that is a relentless hammering when it hits. Yet even the choral vocals are buried behind the guitars. This purposeful. I can respect this even though my ear wants to search for them. "Anthosmos" benefits the most for some of the more adventurous choices the guitarist makes. Still in a more metallic mind frame there are some parts that are more sonically heavy than heavy metal and that is where I feel their sound truly shines in the inner darkness.  The albums gets progressive more blasting. This works for me as they are doing it in a way that works dynamically with the scope of the song. It is not like they have not already shown me they can't do more than blast beats like the tremendous overflow of black metal bands I get in my in-box.

There is a more surreal feel to " Haallucinahila" . It is like a more metallic groove heavy instrumental, until the faint chant of the vocals manage to come through. The song is more about it's pulse than verse chorus hooks. "Cosmic Procyirirs" closes the album. It is flowing in dissonance but moves more smoothly with double bass bubbling under it. The vocals are once a a chanted chorus buried in the distance. I will give this album a 9 . It is pretty unique not just for black metal, but for these guys in general , though different is what they do best .