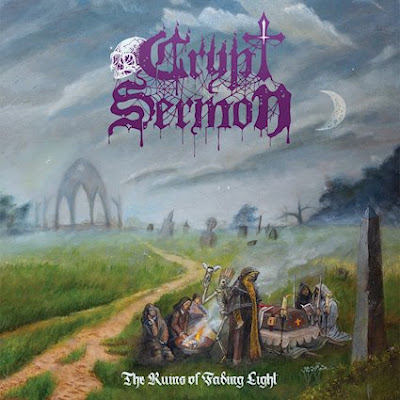 This band finds themselves at the place where power metal meets doom. The guitars have a more driven chug to them. Huge epic guitars are heavy and the vocals soar but have an edge to them. Some of the riffs have more melancholy than others. I like this better than most modern power metal, because it doesn't race ahead of you with a glorious gallop that is too happy to be metal. The vocals do have hook to them are carry memorable melodies, while keeping the 80s cheese influence to a minimum. The only 80s I head comes from a place like Sanctuary  or  Metal Church. Some of the melodies are almost to grandiose for their own good on "Our Reverends Grave" . The double bass keeps things moving, but there formula to this song is very similar to the previous song's. Too up beat for doom, however the influence is undeniable.

"Christ is Dead" highlights the strength of singer Brook Wilson's voice as a lower croon is the more dominant vocal carrying the song. The other vocal colors on this album range from a higher more power metal like warble , but with a sharper edge to it as well as death metal growls that only accent a phrase for a few seconds here and there.  The vocals take on a more of a asp going into "the Snake Handler". The song ends up really going crazy with the guitar solos, which fans of this genre will appreciate, I can deal with this since it is balanced out by some melodic and tasteful touches of guitar as well.  There is am ore dramatic folk infused  to "Enslave the Heathens" which is the intro "Beneath the A Torch Fire Glare" .  This is the first song that fully commits to being doom.  They continue to keep a balance of melody and heaviness on " the Ruins of Fading Light" .

i will round this up to a 9. It is very well done and I like the fact the vocals have a range of dynamics to them. Power metal for those who like darker shades of metal. Though not a dark as say King Diamond. They lyrics are more topical like Iron Maiden and the sinister stays pretty surface level. If you like classic metal, but you want a thrashing bite to it without the speed then this is worth your time. This album comes out September 13th.