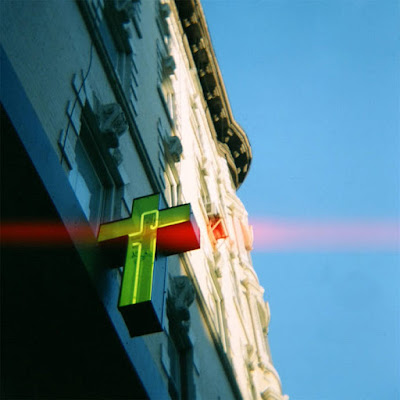 The one man band thing is an odd animal. One that I have grown weary of. Though Joesph Merlini does have a band, he is a creative control freak as he also plays all the bass and drum parts in the studio. Whatever works. I am reluctant to call the New York trio sludge on the opening song as it sounds like Skinny Puppy jamming with Current 93. The second song finds more crunch. There are some harsher screamed vocals in places, but I think one of this album's strong suits is the range of vocal colors offered here. It keeps them from sounding like another Neurosis clone. Though the second song is heavier, I think I like the first one better as it doesn't just pound out the same pulse. So drone is not off the table here.

"Grool" begins to tell me what this album might have gone if they had been in the  studio as a band. I think the input and jamming the songs out more could have kept it from being dynamically flat and made the arrangements more interesting rather than just adding layers to the theme. Sonically this finds many of the same places that Wreck & Reference does. There is more of a groove to the drums of  "Blonde" , but they stay to the same throb rather than developing it into a song that tells more of a story. There is a more aggressive pounding to "Zoe" . The vocals are more punk yelled here. The vocals do drop into a lower grunt and the pounding switches up slightly. I think this lines up more with the hardcore influenced sludge bands like say Fister. "Wet" is a darker creepy atmospheric piece with whispered vocals. I say piece rather than song as it feel more like performance art than music.

The album end with a more violent pounding. The vocals are some where between shouted and spoken, exclaimed. It works off the one riff, so we are back to the one trick pony thing. They do attack the concept of sludge from many angles. I not sure which really hit the hard and fast definition, though the end of the last song builds up steam to be pretty convincing. The vocals reach there burliest growls.  I will give this album a 6.5. I think they captured some interesting sounds and I like the way the varied vocal styles sit on them, but from a song writing perspective it feels more like ideas than songs. .

Email ThisBlogThis!Share to TwitterShare to FacebookShare to Pinterest
Labels: : "Gape", 6.5, album review, All You Know is Hell, new york, sludge