Beastmaker : "Eye of the Storm" 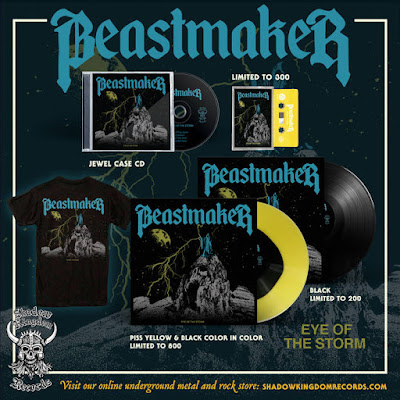 Sadly this is the swan song for this band. Two of the members are in Haunt, so they are bringing this band to a close in order to focus more on that project. I think judging from the title track that opens this album that I prefer Beastmaker to Haunt. These guys are the more metal of the two band. There are less guitar solos here and a darker mood. That is not to say they have gone back to doom. It still is more up tempo and traditional metal owing more to NWOBHM. The album is no devoid of guitar solos as some crop up on the second song. It never feels likes the songs are just bookends serving as place holders for the solo.

The singer knows the limits of his voice and works well with what he has. It is phrasing and more where he does put his voice. There is a more Juda Priest like harmony to the guitars of "My Only Wish". I like the wailig of his voice here, it has the Ozzy like despondency . Once again the chugs are too driving for this to be doom. I can hear how this would still appeal to fans of doom. The vocals are catchy enough to keep me engaged. There is  a more surreal vibe going into "Celestial Glow". This is broken up by the more aggressive chug of guitars. All the songs do stay at the same mid paced tempo.

The uniform nature of the songs' pacing is really the reason I would round this down to a 9,5, I hope they reconsider bringing this project to an end and perhaps some time away from this band will make their hearts grow fonder . They are certainly closing with such a good album that I do not want to see them go as it would be cool to hear where they are going from here , as I do not see Haunt carrying the same torch,  It would have been nice to get more than a four song good by, but I will take what I can get. .