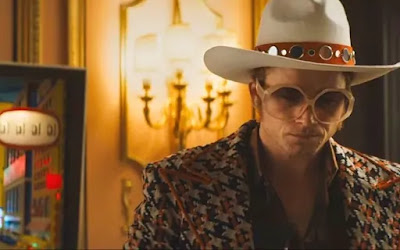 I first saw the trailer for the Elton John biopic before"Bohemian Rhapsody" . Upon seeing it my first question was how are these two movies going to differ considering their stories are so similar? The answer was stylistically.This difference also highlights what the movies strength was... it's visual appeal. Made as more of   musical that told the story with a slant r.ht from the beginning with John waltzing into group therapy at a rehab center in full stage costume. At the end of the movie it was revealed he was actually just wearing a track suit. They keep returning to this therapy session through out the movie. Starting with John as a child singing "the Bitch is Back", some songs are thrown in haphazard regardless of where they feel in his career. So accuracy is not what this movie is going for , but to capture the feel.

Taron Egerton is the movies strength and it's weakness. He looks like a young John, thanks to the outstanding wardrobe department on this film, which I would expect should win an award for costumes. He adapted John's early insecure mannerisms, drugged out paranoia and stage charisma. Where is falters is capturing John's voice. It sounds like when it come time for the high notes he gets scared if they are not in chest voice. His falsetto is very weak. John's was strong and sometimes on the shrill side. The other issue I had with the movie was the dancing. It made the movie at times look like a Paula Abdul video and never fit the tone of the 70s. When Egerton or the child actors interacted with the dancing it seemed very forced.

What worked with the movie is that is was visually stunning. Despite the fact that the director was also the producer of the Queen film the two movies did not feel similar. The emotional tone of this movie was more intimate. Perhaps Freddie was more detached. The drugs and drinking made it clear that while Mercury partied hard and had consequences, he was not an alcoholic as he could stop as needed, where John was more of a hurricane in that regard. I think Elton John fans who go in knowing things might not be air tight in regards to history, should find this movie entertaining and moving .
Posted by Wilcifer at 12:46 PM