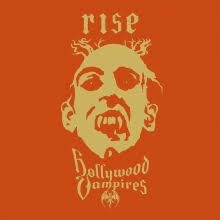 First impressions of this band being here is what happens on A.A golf events in LA when rock stars and movie stars have too much time on their hands. Despite the fact I am an Alice Cooper fan and know Jo Perry is good guitar player I was till skeptical so was surprised with how the album opened with a rock song that is more serious than I thought I could take this band. Though it is darker and slinkier "Who Laughing Now" suffers from lyrics that seem silly to me. "Boogieman Surprise" surprise feels more like an odd Alice Cooper song from the early 80s. Then things get country on " Welcome to Bushwhackers". It is kinda silly.  They cover the Johnny Thunder song 'You Can't Put Your Arms Around a Memory" Joe Perry sings this one. Obviously when you are the guitarist for a band as big as Areosmith you are going to be a pro.

Sonically so far "Git From Around Me' is the most intresting song thus dark as it is darker and heavier. Johnny Depp then takes on Bowie's "Heroes". This is the least vocally demqanding of his songs, so it fits Depp's voice until he has to reach for the notes as the song build and just exclaims them louder than hitting the notes with any kind of power. "New Threat' sound like filler from one of Cooper's cock rock albums. "Mr Spider' sounds like classic Alice Cooper that these guys are just guesting on. "We Gotta Rise" is a drunken pirate song  that is pretty dumb. "People Who Died" is not much better . At best it ssounds like Alice Coopers new wave years mixed with punk.

There is a more Pink Floyd like tone behind the spoken word of "Congratulations" if almost feel more like an outro than a song. I  will give this one an 8. It is obviously not Alice Cooper's best  work. If you don't know better you might even be really impressed. I think there are some strong moments on Cooper's behalf. .