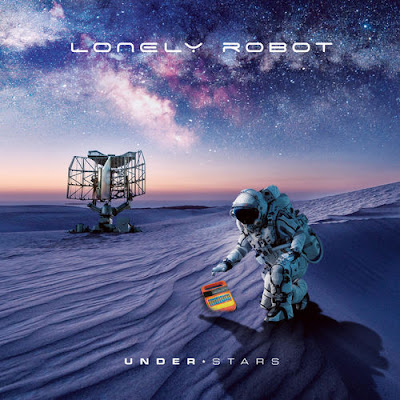 We have crossed paths with  solo project of John Mitchell  before in various over views of modern progressive rock. The first song of this sci fi prog album is rather soaring like Porcupine Once was , but the vocals reminded me of solo Peter Gabriel. The second song is much more poppy and less rock.I like the opener better, but one way to look at this is at least they are not bogged down by being prog that they are afraid to progress beyond complexities and write a pop song or two."Under the Skies" begins to set the tone towards more ballad like song, think Marillion here for more of a reference point . Much like that British prog power house, the pop sense is trumping the rock drive.  "Authorship of our Lives " has more punch to it's chorus.

"the Signal" is a  slow burn that never catches fire. As far a modern prog rockers go I would say the guitar playing is under rated as their solos balance chops with taste. The builds in some places are thankfully more Porcupine Tree than Dream Theater, as it never gets Journey in the scope .  To the point that their restraint makes me think of Mute Math at times. The first riff that strikes me as heavy comes into play at this song. Which is good as I was needing these guys to get some balls. The is a more experimental tone going into " When Gravity Falls". The guitars are a good deal heavier than what we have heard previously. The vocals keep coasting along as they have. Thus the bass takes over on the verses when it breaks down.  What they did on the chorus is fine, but dynamically I think something with more grit might have raised the stakes.

I want songs to be bookends for a guitar solo, but the solo in the other wise ballad called "How Bright is the Sun" pulls it all together and expands the dynamics.  The rest of the song is better than decent it is just very subtle and takes a bit to grow on me.  "Inside the Machine" is an instrumental that if it did not showcase their stellar guitar skills might not work for me , but it does . The album ends with a song about themselves ? It is more of a ballad. Despite all the ballads, what they do here is very well done. It sounds great and the guitars are awesome I will round this up to a 9, unsure how much I will feel compelled to listen to this one a daily basis.