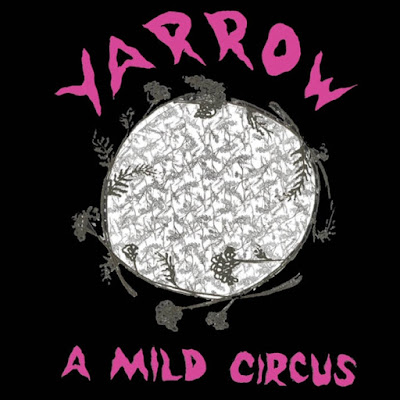 First heard these guys on  Cvlt Nation's Tribute album to Black Sabbath's "Vol 4". These guys are not really doom here. They are an angular grunge with a thick dose of punk . Like a darker more chaotic version of Mudhoney is one way to think of it. I can also hear traces of Fugazi. "Tambourine" keeps the spot light on their angular nature. There is still a darker tone. It is more grunge than not  with the punk side still leaning in the Fugazi direction. ;Thee song writing is cumbersome with dissonance, but it still works they are just not hitting you with the conventional groove and melodies you expect from indie rock.


They give the vocals more breathing room on "Shyless". This also opens the door for the drums to establish more of a groove. That is not to say they are not going to explode back out of it.One thing about this band I like is they have no regard for using any type of formula.  The songs are very compactly written. The title track is more aggressive like the Melvins though leaning less towards metal. If you ever wondered what it might have sounded like if Nirvana had jammed with Fugazi, that question is answered on the album's last song "Sorrow". It is marginally more moody while having the uptempo momentum propelling the bulk of these songs

. I think the fact it takes a D/C post hardcore and marries it to grunge angst, is what sells me on this albums as it reminds me a of a slew of bands I used to listen to in high school in the 90s. I guess doom gaze is the most ironic hash tag to use these days as there is nothing doom about this album. If that is what you are looking for look else where. I will however give this a 9 as the sounds captured here fit like puzzle pieces to create a familiar yet unique sound.