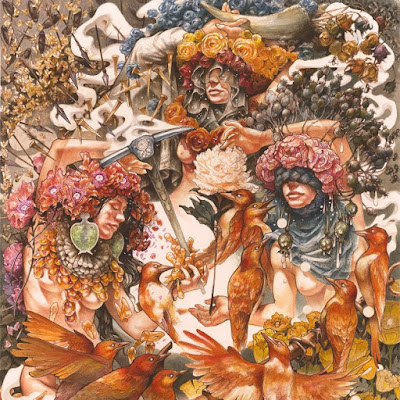 The first album after their Grammy nominated "Purple Album" and their first with new lead guitarist Gina Gleason,...who has played in both all female Metallica and King Diamond tribute bands, along with sitting in with Smashing Pumpkins. The stakes are high if they want to keep their momentum as a high profile hard rock band. Even with all of the interludes this still proves to be a double album. The album opens with an uptempo song with a great deal of drive, but otherwise pretty straight forward. "I'm Already Gone" has a more interesting groove. The bellowed baritone vocals still feel a little like a one trick pony here. The atmospherics find it heading in better direction."Seasons" is more progressive and aggressive than the first two songs. At first it seemed to just try to dazzle with it's dynamic range, but it grew on me.

Then things take a jarring turn to an acoustic folk infused song. It doesn't feel like a power ballad , but it gazes in that direction,until it cranks up midway into it. The bass playing on this album is impressive. They also uses a wider array of guitar tones. "Throw Me an Anchor" starts off as more of a Mastodon like ditty, then transitions into a big classic rock like chorus...think Thin Lizzy here. The verses don't do much for me on this one. "I'd Do Anything" is very emo...and yes I mean Dashboard Confessional. "Emmett Radiating Light" is another slow song, though more somber than the emo moments. The guitar to "Cold Blooded Angels" reminds me of "Blackbird" by the Beatles. The song gradually builds and has what is likely the album's best vocal performance and showcases harmonies with Gleason lending her voice. They get heavier with "Broken Halo", by heavier not really metal, but more rock and not leaning towards a ballad. For what they typically do these days it is pretty par for the course.

The more throaty croon of the chorus to "Borderlines" does more for me than the angular mathematics .There is a more psychedelic tone to "Pale Sun" that closes the album. It has texture and groove which are two things important to me as a listener. I will give this album a 9. It was pretty ambitious , but they pulled it off. Very pristine production wise.If you are a fan and ok with hearing their more introspective side then you should like this.