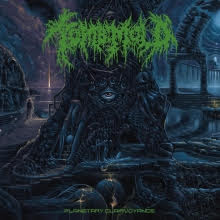 It is always weird to me when the drummer in a death metal band is the growler. When you have thundering double bass it seems like a great deal of multitasking. These guys are going for a dirty old school sound. It is pretty impressive when he is growling over the faster sections, though it is highly unlikely he does that in the studio, he still has to deliver live. Like most extreme metal bands they get a pass on the first song because you are just caught up in how heavy it is. After that the question needs to be raised , but can these guys write a song. Another fair question at this point is also what are these guys doing that I have not heard before?  The latter part is not really explored into the melodic break down at the four and a half minute mark,

There is more of a full frontal blasting assault to "Planetary clairvoyance", Even then these guys get credit for breaking it up and not going the most direct route. This is where the originality lies, not in the low Cannibal Corpse like vocals. There is a similar bull dozing hammering effect with "Infinite Ressurection" the emphasis begins to become speed. The songs start racing past me and all sounding the same so I had to go back and give it a more focused listen. They keep this opaque aggression in place , though still manage to find some groove on "Accelerative Phenomenae". They don't let this breath for long and the formula seems to expand and contract when it comes to how up close and personal the full speed ahead gets.

"Cerulean Salvation" has a few riff with some hook to it , but the wall of double bass and tremolo picked walls of density coming at you obscure any dynamics. "Heat Death" pretty much seems like a continuation of the previous song. I would not say this album runs out of steam, but it all comes a blur that bores me by the last song. The captured good sounds and have their moments so I will give this album a 6. If heavy is what you want out of your death metal, then this is worth your time. It comes out on 20 Buck Spin.